In his interview to Gazeta po Kievsky, Ukrainian designer Yuri Varivoda said that creating style for Viktor Yanukovych's wife, Lyudmila Yanukovych, would require significant effort, but nothing was impossible for a true professional. 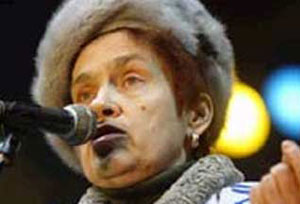 According to Varivoda, Mrs. Yanukovych will have to find an appropriate makeup, hairstyle, clothes, and take care of her skin.

“European style would be good for her, with reserved classic outfits and minimum accessories. Something simple, like Oscar de la Renta. But Ukrainian outfits and even a hint at ethnics would make her look ridiculous rather than elegant like Katerina Yushchenko," said the designer.

He believes that, ideally, stylists should have started working with her a year before the election, though a good stylist can improve the situation in as little as three months.

“On the other hand, if all her clothes are changed in a day, she will not have time to get used to her new self. It would be best to change her style gradually, dressing her in discreet colors,” stressed Varivoda.

“Granted, even the best stylist is unlikely to make her look like Michelle Obama or Carla Bruni. She has to learn to speak properly and carry herself in a certain way. If she has not done any work in this area yet, that’s too bad,” said the designer.

“Unless, of course, Lyudmila Yanukovych is being prepared for the same role as assigned to the wife of President Alexander Lukashenko. That’s when the first lady takes care of her grandchildren, and appears at her husband’s side in rare cases”  summed up Varivoda.

Lyudmila Yanukovych is the wife of Ukrainian presidential candidate Viktor Yanukovych who has no intentions of becoming the first lady. This confession was made by the leader of the Party of Regions during a recent broadcast on ICTV channel.

“My wife has already warned me that she will pay much more attention to our grandson than me. She even told me how she was going to do it. I said: I’m not going to bother you, I will only help,” said Mr. Yanukovych.

Viktor Yanukovych met his future wife 40 years ago at the Yenakiyevo Metallurgical Plant. The young welder volunteered to help a young girl who had just dropped a brick on her leg. “I looked at her, and my heart shuddered,” recalled the leader of the Party of Regions in an interview. They got married three years later.

The public remembers Lyudmila Yanukovych by the election campaign of 2004, when during a meeting in Donetsk she stated that the proponents of Victor Yushchenko on Maidan were giving out oranges pumped with drugs. The video with her address was broadcasted by all TV channels and online media.