Canada’s Vancouver changes every day on the threshold of the opening of Winter Olympics on February 12. Thousands of prostitutes from all over Canada rush to the city in a hope to make a lot of money. Local escort agencies welcome new personnel expecting a considerable growth in demand on their services. 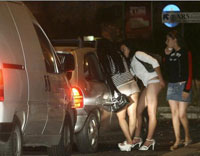 The prices on intimate services in Vancouver will grow considerably too. Hard-working females can make tens of thousands of dollars in only two Olympic weeks. Nigh clubs, massage parlors, striptease bars, etc also hire additional personnel for the Winter Olympics.

Female employees who wish to work in the above-mentioned organizations are aware of the fact that they will have to take a very active part in the Games too. Many women come to Vancouver to work “like Olympic champions” for two weeks and then return back home.

The number of female job-seekers in the city has increased drastically over a very short period of time. Employers have to interview 3-4 women at a time. The game is worth the candle: a client will be ready to pay $300-400 for one hour of intimate services.

Agencies already receive multiple orders from clients who arrived or are going to arrive in Vancouver for the Games. Employees of one of the agencies already make daily, or nightly better to say trips to hotels near the airport of Vancouver. The number of calls from Whistler, where the Olympic village is located, have had a five-fold increase.

Some foreigners book escort services in advance in an effort to have cheaper services – about $250 an hour.

Volunteers will be distributing free condoms for tourists in the city during the Games. Activists have also prepared free booklets containing information about the danger of AIDS, sexually transmitted diseases and sex slavery.

Prostitution per se is not prohibited in Canada. The Canadian law does not allow advertising sex services or maintaining brothels.