International and internal opposition to the Belo Monte dam Project in the Amazon led the Brazilian Government to suspend the construction of a super-dam in the 1990s. Today as Brazil once again announces plans to resurrect the project, critics are springing up in the international community lending their voice to those who think they know better than President Lula and his team. 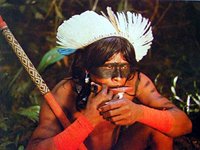 The Belo Monte project in the State of Para has for twenty years mobilised social and environmental groups which claim that the 17 billion-USD project (the world’s third largest dam) on the Xingu River (tributary of the Amazon) will decimate wildlife and displace the indigenous population.

The well-meaning ex-rock star Sting led his voice to the campaign of the environmentalists, while local indigenous groups have claimed that their lands will be submerged and that the environment on which they have relied for thousands of years will be gone. Meanwhile environmentalist groups worldwide have launched scathing attacks against the Brazilian Government, stating that its drive towards economic progress has no regard whatsoever for the survival of whole tribes of indigenous peoples.

The Government, however, claims that the original project for an area of 5,000 sq. kilometers has been scaled down to a tenth of that area – 500 square kilometres. The Minister for the Environment, Carlos Minc, stated yesterday in a press conference that “The environmental impact exists but it has been weighed up, calculated and reduced”. Moreover, the Government has claimed that not a single Indian living on tribal territory will be displaced.

While the local environmentalists would welcome the international support they receive, those on the outside should remember the great deal that the Government of President Lula has contributed towards Brazilian society and the great progresses that have been made in curbing deforestation of the Amazon rainforest, which has been reduced by 72.5 % in the last year.

Regarding the Amazon, the Brazilian Government has activated and enhanced various programs, namely the Deforestation Detection in Real Time (DETER), the National Institute of Space Research (INPE), the Green Arch (Arco Verde) which provides support to those wishing to set up fish farms and Fundo Amazonia (Amazon Fund) which finances sustainable projects.

So if Belo Monte is a white elephant motivated by political greed, it would be well for all to remember that the Amazon is Brazilian and to Brazil it belongs.