A curious story took place near the Moscow Kremlin on Wednesday, January 20. At about 5:30 p.m. the police arrested a man of Caucasian origin near the Spassky Gate of the Kremlin. In Russia, especially in Moscow, the police pay a lot more attention to Caucasian-looking individuals than to people of Slavic appearance. Therefore, when officers saw such a man near the Kremlin, they stopped him and asked for his ID, Pravda.Ru reports. 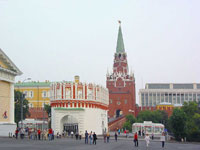 The officers said that the man was well-dressed and was humble in his behavior. The man introduced him as Bakhtiyar, a national of Dagestan. He told the officers that he wanted to go to the Kremlin because he had a very important meeting scheduled with Russian President Dmitry Medvedev. The man said that he wanted to meet Mr. Medvedev to ask his daughter’s hand in marriage.

It looks like a sweet story, but there is a problem: Dmitry Medvedev does not have a daughter.

The Moskovsky Komsomolets newspaper found out that Bakhtiyar was 35 years old. He came to Moscow from Dagestan for earnings two years ago and worked as a crane operator.

The police officers decided to take the man to a mental institution for examination, although such a procedure requires an official court approval first.

Medvedev does not have a daughter, although his predecessor and Russian sitting Prime Minister Vladimir Putin has two. There is very little information about Putin’s family (photos). The list of Russia’s most desirable single women is topped by someone else, though.

The queen of the list is the Russian version of Paris Hilton – Ksenia Sobchak (photos), a TV host. The silver goes to renowned rhythmical gymnast Alina Kabaeva (photos), who also currently works as a TV host on a Russian channel.

Dmitry Medvedev’s only child is a boy named Ilya who is 14 years old now.