Affairs of Russian female tourists with foreigners often come to no good. In the best case scenario, an affair will simply end, and in the worst case scenario a potential groom would rob a romantic traveler. A story of Svetlana from Smolensk, Russia, is a happy exception. 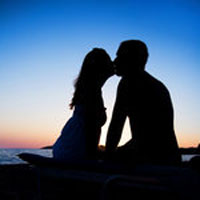 Eight years ago, Svetlana had no intentions of starting a family. She had a nice job and was involved in non-feminine sports, arm-wrestling. She participated in countless competitions and even competed in a European Championship. This petite, fragile woman achieved significant success in sports and became a Master of Sports. She was willing to continue her sports career, but love suddenly changed everything.

Once, Svetlana and her girlfriend went to Egypt for a vacation. However, on the very first day she saw a sales assistant in a small Egyptian store and fell in love immediately.

“Rafic was different from other Egyptians I’ve met. He was not trying to force his goods on us. He invited us for a cup of tea. I could see he was a very intelligent and educated person. I think that’s what attracted me,” Svetlana says.

Svetlana began visiting her new acquaintance who spoke decent Russian. At night, the young people would go out together, and it seemed that it would last forever.

Two weeks of vacations have come to an end, and Svetlana had to go back to Russia. “The last goodbyes were unbearable, and we promised each other to meet again. And we did.” Two weeks later Svetlana came over again to see her beloved man who missed her already.

In September Svetlana met Rafic’s parents. At first they were against the idea of his son marrying a Russian woman. Soon, they saw that his son’s relationship was serious, and gave the couple their blessing.

According to a local tradition, a groom has to buy and furnish an apartment before the wedding. Rafic had to rent a house, which does not contradict Egyptian traditions. “There were only two months between the engagement and the wedding,” Svetlana says.

After the wedding, Svetlana and Rafic decided to stay in Egypt. The new wife accepted a job as a tour guide, conducting jeep tours in the dessert for Russian tourists. She had to quit her job when her second child was born.

Yet, Svetlana missed Russia and the snow. She also missed Russian holidays since Egyptians do not celebrate birthdays or the New Years as they do in Russia.

When the financial crisis came to Egypt, Rafic’s business collapsed, and the family moved to Russia where the kids could get a better education.

The kids quickly adjusted to the new life. The younger boy, Andru, is in pre-school, and five-year old Karina speaks both Arabic and Russian.

Svetlana is waiting for Rafic to close the business in Egypt and come to Russia in January. She is looking for a meaningful work and dreaming of getting a job in a puppet theater or as an event coordinator.