The onset of middle age can begin as early as 35, according to recent studies made in the United States of America. Research has shown that extreme pressure at work, job insecurity and financial worries can cause the ageing process to start in the early thirties. The bad news is that the trend seems to be speeding up. 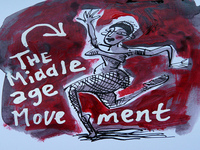 The Philips Center for Health and Well-Being in the USA has released a study on the ageing process made among a sample of 1,503 American men and women. According to the report issued last week, the majority of the 35-year-olds who took part in the study said they already felt the weight of middle age.

Economic worries affected eighty per cent of the universe, while health problems affected 75 per cent, both of these factors contributing towards an early process of ageing, resulting in the onset of characteristics of middle age beginning in the mid-thirties.

Denise Para Diniz, in her book Quality of Life, states that “Feeling there is a possibility of losing your job and not being able to afford to pay your child’s school fees, or having to cancel that trip you planned a long time ago, certainly causes worry and anxiety”. The therapist adds that “And of course this begins to affect other areas of quality of life, causing insomnia, anxiety and even depression”. This in turn places a burden on the body and the ageing process begins earlier.

Denise Para Diniz states that the economic recession in the United States of America affected a great number of people in an extremely intense way and admits that this could have contributed towards the results in her study. She states that “from a clinical point of view, I see people in this age group, that of the early thirties, far more worried that they were a few years ago”.

The study also revealed that only 39 percent of those who took part in the study considered that they were overweight while in fact other studies show that in the USA, 67 percent of the population is obese or overweight.