Male prostitution in Russia is flourishing, and the prices for the services in this sector continue to rise due to high demand and lack of resources. It is not surprising that male prostitutes are considered valuable assets. In case of disobedience they are at times deprived of their genitalia. 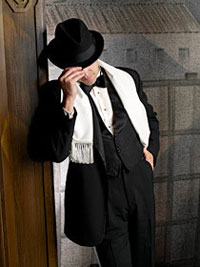 Male prostitution business is experiencing especially high growth in the Rostov region, where a minimum pay for an hour of service is $70. Most of the clients are mature wealthy ladies who can easily pay pretty penny for a night of love a couple of times a week.

Lately, there are increasingly more clients among businesswomen in 30-35 year old bracket. They order boys like they order pizza or sushi with delivery. They have no time to build relationships, plus it is not that easy to find a good guy for a serious relationship. With prostitutes, they can pay and have no obligations.

Not all men trading their bodies have ignoble purposes. Sometimes, undercover police agents pretend to be prostitutes. In December, an undercover agent pretended to be a sucker for easy money. Thanks to his efforts, the police managed to arrest a pimp and an entire brothel in Rostov-on-Don. Later, the pimp handed in his brother who was offering young guys for prostitution over the Internet.

In December of last year, the police arrested a man in Moscow who came from the Rostov region. The criminal organized an entire network of male prostitutes in Moscow. A Master of Sports in karate, an employee of a Moscow agency working with youth, and a trainer of martial arts, the criminal would find clients online.

The pimp would also recruit young men at train stations who would be ready to have sex with men for pay. Most of the recruits were homeless, and the client list included foreigners who would come to Moscow for a sex-tour.

When the sportsman was arrested for human trafficking and pimping, his business has not ceased its existence. The pimp’s nephew took over the business and continued looking for clients on line.

When the police received information about new trafficker, it was decided to take him with bait. A policeman had to pretend to be a sex-tourist fond of young guys.

While the police are trying to fight the top of the criminal iceberg, scientists and officials are trying to solve the problem at the all-Russia scale. Scientific seminars dedicated to the issues of the state regulation of the sex-industry are held in Moscow and other large cities. Participants of the seminars include psychologists, sociologists, heads of social services, and other interested parties.