A famous musician and a People's Artist of Russia passed away at age 75. According to his widow, Nelly Zakirova, Garanian suffered a heart attack on January 11, 2010, at 11 am. 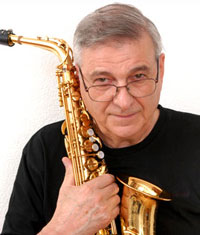 It happened in Krasnodar, Russia, where the musician was scheduled to conduct the Krasnodar Municipal Big Band during two planned concerts on January 15 and 16 with a famous French soloist Michel Legrand.

People of all generations used to come to Georgy Garanian ’s concerts, including older generations and those who only began to discover the wonderful genre of jazz. They learned about Georgy Garanian from their parents who still have vinyl records of Melodia band and bring them to concerts to get an autograph of the living legend.

Yuri Saulsky, one of the patriarchs of Russian jazz and the president of the Moscow Jazz Agency shared his thoughts: “Creative career of one of the most famous Soviet jazz musicians Georgy Garanian was shaping up before my eyes. He is a brilliant representative of mainstream who largely affected this concept in Russian jazz music. Garanian is a saxophonist , composer, arranger, and a director who was greatly skilled in all these professions. He is without a doubt one of the most important personas of the contemporary Russian jazz.”

He paid a great deal of attention to educating others about jazz. He was the author and host of a radio program Jazz Club of Georgy Garanian and the host of TV program Jam-5.

He was the first Russian jazz musician to be named a Distinguished Artist (1981) and a People’s Artist of Russia (1992). Regular sell outs in the Great Hall of the Moscow Conservatory made him the first jazz musician to receive the State Prize of Russia.

Yet, all his titles and fans did not make him change. Garanian remained a very modest person.

He used to say that good jazz musicians in Russia lived a good life. He said that jazz in Russia was popular and concert halls were always packed with fans. He mentioned that many of his American friends who were great musicians had to work day jobs to be able to play jazz at night. He considered himself lucky being able to make money doing something he loved.

Garanian was calm and wise. He was not only a musician and a teacher, but also a real peacemaker. He was raised in a Russian-Armenian family and absorbed both cultures, therefore he always called for peace between conflicting nations.

“I think that conflicts between nations are a sign of contemporary times. It was not like this before . I had two Azerbaijanis working in my band . Look at my family . My wife, Nelly Zakirova, is a Muslim, I am a Christian, and we never have “religious wars.” We are both spiritual people and respect each other. I can also add that my step daughter took my last name and wrote “Armenian” in the nationality field. By the way, I have three daughters. The eldest Natalia is a psychologist, Karina lives in the USA, she is a computer designer, and Veronica is a journalist, she works in France. She graduated from the Academy of Motion Picture Arts and works in TV. My wife Nelly is a journalist and I can see her reports on TV,” Garanian said.

Garanian thought his textbook on orchestration written in the 1970s to be his greatest educational achievement. The book is still used by students of Russian music schools and Institutes.