The Military Museum, Del Roiling in Mexico City, has on display weapons, jewelry and other luxury items from drug bosses. The museum, located in the Mexican Department of Defense, has a pistol with 121 diamond stones, which belonged to the dealer Stanislaus Olmos. 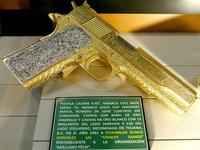 About two dozen golden weapons, some with more than one hundred small diamonds in the breech and others with the names of traffickers, for example, "The Matador" and "Ambassador", are recorded and displayed.

Secondly, according to Colonel Osvaldo Pimenta de Figueiredo, of the Military Police in Brazil, "the trafficker seeks to place, especially the gun, to his personality, his way of thinking and acting, but in some cases it is only one way to show off the power and the glory that they imagine having."

"Not all of the traffickers can have a weapon like this, not because it costs $ 20 to $ 30 thousand (the price of two kilograms of cocaine, approximately), but it depends on the respect and class that they have won," explains Colonel Osvaldo Pimenta de Figueiredo.

The weapons contain engravings of wildlife and luxury jewelry such as gold, brilliants, rubies, emeralds ivory and scenes with historical characters and artistic decorations.

The luxury of narco culture is present in all types of objects seized from traffickers, such as mobile phones in gold, which belonged to Daniel Perez Rojas, "El Cachetes," and the group Los Zetas, the armed wing of the Gulf Cartel.

The identification of trafficking members such as a gold coin, engraved with a Z, is also part of the collection. At the side of that coin are Christian Dior sunglasses with golden stems of Benjamín Arellano Félix, "El Tigrillo", former leader of the Tijuana cartel, arrested in the United States.

Hanging on the wall is the white hat of "El JT", Javier Torres Felix, operator of the Sinaloa cartel. The museum nevertheless has weapons with less ornamentation than guns of gold, but more deadly, like an AK-47 assault rifle for excellence in organized crime.

There is also a machine gun EFPs and AR-15, widely used by arms traffickers. This is the most colorful of the enclosure created by the Mexican Army in 1985 to help fight drugs in Mexico, where traffickers are the most powerful of the Americas.

Despite it not being open to the public, the museum has an educational objective for the military itself and the training of professionals such as lawyers and criminologists. Its rooms are all about the Army's actions in the fight against drugs and objects continuously arrive, as well as photographs of arrests and confiscations.

One of the most recent acquisitions is a vessel for processing synthetic drugs found in the largest drug lab dismantled in Mexico, located in the uplands of Las Trancas, in Durango, part of the "golden triangle of drugs" in Mexico, a small town where the Sinaloa cartel manufactured 100 pounds of cocaine per day.

In the museum there are also messages sent to soldiers by the traffickers, asking them not to destroy the poppy and marijuana plantations. "Gentlemen soldiers we plead that you not spoil the work. If you want to leave a note with your requests, we will make a deal and everything will be resolved," says one of the messages.

Even the methods used by trafficking to transport drugs are exposed, such as human "mules" figures and bowls of milk.