Record winnings in the New Year Lottery in Brazil are the biggest ever in the history of the event in Latin America. Two Brazilians share a prize of nearly 150 million Reais (87 million USD) – the lucky ones among 200 million bets - and one of them bet just one dollar, the minimum. 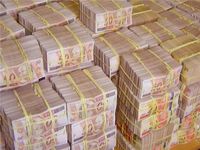 The Mega Luck of the Big Year is the rough translation of Brazil’s largest lottery, which on December 31st created the biggest ever Jackpot payout in Latin American history. The highest amount paid so far was the equivalent of 37 million USD in Bahia in 1999 (which in today’s value would be equivalent to $ 66m.)

Today two lucky betters out of 200 million can withdraw their money from the Federal Bank, to the tune of 43.5 million USD each, the equivalent of one thousand sparkling new beachside homes in the country’s main tourist resorts.

The bets were placed near the capital city, Brasilia and in a small town in the State of Sao Paulo called Santa Rita do Passa Quatro, where the winner bet the minimum of 2 Reais ($1.16). Another optimistic better in the same state bet 30.000 Reais (17.400 USD), and lost. The winner from Santa Rita de Passa Quatro is a 78-year-old man named Adolfo, retired, father of 12 children (one dead) who left his home along with his wife, children, grandchildren and great-grandchildren as soon as they knew about the result.