The existence in the developing world of 146 million underweight children under 5 contrasts with the reality of Cuban children, recognized worldwide for being oblivious to this social evil. These disturbing figures emerged in a recent report by the United Nations Children's Fund (UNICEF), entitled Progress for Children, a record about nutrition, released from UN headquarters. 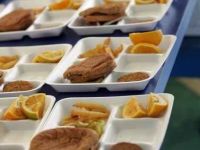 According to the document, the percentage of underweight children is 28% in sub-Saharan Africa, 17% in the Middle East and North Africa, 15% in East Asia and the Pacific, and 7% in Latin America and the Caribbean .

Rounding out the table in Central Europe and Eastern Europe, with 5%, and other developed countries, with 27%.

Cuba has no such problems. It is the only country in Latin America and the Caribbean that eliminated severe malnutrition due to the government's efforts to improve people's diet, especially those most vulnerable.

The raw realities of the world show that 852 million people suffer from hunger and that 53 million of them live in Latin America. In Mexico, there are 5.2 million undernourished people, and in Haiti 3.8 million, while around the world more than 5 million children die of hunger every year.

According to UN estimates, it would be costly to achieve basic health and nutrition for all people in the Third World.

This goal could be achieved with an additional 13 billion dollars a year to what is intended now, a figure that has never succeeded and which is imperative if compared with the trillion each year that is intended for commercial advertising, the 400 billion on drugs or even the 8 billion that is spent in the United States on cosmetics.

To the satisfaction of Cuba, the United Nations Food and Agriculture Organization (FAO) has also recognized that this is a nation with more advances in Latin America than any in the fight against malnutrition. The Cuban state provides a basic food basket, which allows for the nutrition of its population - at least at basic levels - through the distribution of a network of standardized products.

Similarly, it takes out economic adjustments in other markets and local services to improve the nutrition of the Cuban people and to mitigate the food deficit.

In particular, there remains a constant vigilance on the maintenance of boys, girls and adolescents. Thus, attention to nutrition begins with the promotion of the natural and best form of nutrition for humans.

Since the early days of life, the incalculable benefits of lactating mothers justifies all the efforts made in Cuba for health and development in real childhood. This helped to raise the percentage of newborns to keep until the fourth month of life, an exclusive breastfeeding counselor, and even continue to consume milk, supplemented with other foods until 6 months of age.

Currently, 99% of newborns discharged from hospitals, exclusively with maternal lactation, were higher than the proposed goal, which is 95%, according to official figures, which state that all provinces of the country meet this goal.

Despite difficult economic conditions experienced by the island, monitoring the feeding and nutrition of children is done through the daily delivery of a liter of fluid milk to all children up to 7 years old.

Added to this, other foods are delivered, for example, jams, juices and vegetables, which, depending on the availability in the country's economy, are distributed evenly in the early years of childhood.

Until the age of 13, the priority is the distribution of subsidized complementary products such as soy yogurt and in situations of natural disasters to protect children through the free provision of food staples.

The children incorporated into the Circles for Children (nursery) and primary schools in semi-boarding receive, in addition, the benefit of the ongoing effort to improve their diet and the dietary components and milk protein.

With the support of agricultural production - even in severe drought conditions - and increased food imports, achieves a consumption of nutrients above the standards set by FAO.

In Cuba, this indicator is not the average fictitious sum of food consumption of the rich and the hungry.

Additionally, social consumption includes school meals, which are distributed free to hundreds of thousands of students and education workers, quotas and special food for children under 15 and people over 60 in the eastern provinces.

In this list, pregnant women, breastfeeding mothers, the elderly and disabled people are covered, the food supplement for children with low weight and size, and food supplies to the municipalities of Pinar del Rio, Havana and the Isle of Youth.

These entities were punished last year by hurricanes, while the provinces of Holguin, Las Tunas and Camaguey 5 cities currently suffer at present from drought.

In this effort, World Food Program (WFP) helps to improve the nutritional status of vulnerable populations in the east, where they benefit more than 631 thousand people.

WFP's cooperation with Cuba dates back to 1963, when the agency toasted immediate assistance to victims of Hurricane Flora. To date, the country consummated 5 development projects and 14 emergency operations.

Recently, Cuba has gone from being a recipient to being a donor.

The issue of malnutrition charges great importance in the UN campaign in 2015 to achieve the Millennium Development Goals, adopted at the Summit of Heads of State and Government held in 2000, and have among their goals to eradicate extreme poverty and hunger by that date.

But the Cubans say these goals do not frighten anyone. The UN itself situates the country at the forefront of compliance with such challenges for human development.

Not without shortcomings, difficulties or severe limitations imposed by the economic, commercial and financial blockade imposed by the United States for over 4 decades, Cuba does not show desperate or alarming rates of child malnutrition.

None of the 146 million children under 5 underweight living in the world today are Cuban.

In other words, Cuba leads and others can learn from Cuba.