Each year ends with long lists of those, who will no longer be with us. The year 2009 took the lives of many famous people, some of whom were the icons for several generations. Let’s keep their names in memory. 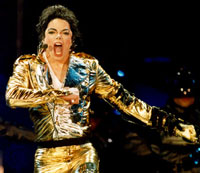 Michael Joseph Jackson (August 29, 1958 – June 25, 2009) was an American musician, dancer, and entertainer. Referred to as the King of Pop, he is the most commercially successful and one of the most influential entertainers of all time. His unique contributions to music, dance, and fashion, along with a highly publicized personal life, made him a prominent figure in popular culture for over four decades.

Farrah Fawcett (February 2, 1947 – June 25, 2009) was an American actress. A multiple Golden Globe and Emmy Award nominee, Fawcett rose to international fame when she first appeared as private investigator Jill Munroe in the TV series Charlie's Angels in 1976. Fawcett later appeared off-Broadway to the approval of critics and in highly rated television movies in roles often challenging (The Burning Bed, Nazi Hunter: The Beate Klarsfeld Story, Poor Little Rich Girl: The Barbara Hutton Story, Margaret Bourke-White) and sometimes unsympathetic (Small Sacrifices). Fawcett was also a pop culture figure whose hairstyle was emulated by millions of young women and whose poster sales broke records, making her an international sex symbol in the 1970s and 1980s.

David Carradine (December 8, 1936— June 3, 2009) was a popular American character actor of stage,and screen. He was a director, martial artist, spokesman and musician. In his four decades of acting he was best known for his role as Kwai Chang Caine in the 1970s television series, Kung Fu, and its 1990s sequel, Kung Fu: The Legend Continues. More recently, he acquired notoriety for his role in Quentin Tarantino's Kill Bill. On June 4, 2009, David Carradine was found dead in his room at the Swissôtel Nai Lert Park Hotel on Wireless Road, near Sukhumvit Road, in central Bangkok, Thailand. He was in Bangkok to shoot his latest film, Stretch. A police official said Carradine was found hanging by a rope in the room's closet, causing immediate speculation that his death was suicidal. However, evidence suggested that his death was the result of autoerotic asphyxiation.

Patrick Wayne Swayze (August 18, 1952 – September 14, 2009) was an American actor, dancer and singer-songwriter. He was best-known for his roles as romantic leading men in the films Dirty Dancing and Ghost and as Orry Main in the North and South television miniseries. He was named by People magazine as its "Sexiest Man Alive" in 1991. Diagnosed with Stage IV pancreatic cancer in January 2008, Swayze told Barbara Walters a year later that he was "kicking it". However, he died from the disease on September 14, 2009. His last role was the lead in an ill-fated A&E TV series, The Beast, which premiered on January 15, 2009. Due to a prolonged decline in health, Swayze was unable to promote the series. On June 15, 2009, Entertainment Tonight announced that the show has been canceled.

Brittany Murphy (November 10, 1977 – December 20, 2009) was an American actress and singer. She starred in films such as Clueless, Girl, Interrupted, 8 Mile, Uptown Girls, Sin City, Happy Feet, and Riding in Cars with Boys. She also voiced Luanne Platter on the animated TV series King of the Hill. Her final film, Abandoned, is expected to be released in early 2010.

Roy Edward Disney, KCSG (January 10, 1930 – December 16, 2009) was a longtime senior executive for The Walt Disney Company, which his father Roy Oliver Disney and his uncle Walt Disney founded. At the time of death he was a shareholder (over 16 million shares or about 1%), and served as a consultant for the company and Director Emeritus for the Board of Directors. He is perhaps best known for organizing the ousting of two top Disney executives: first, Ron Miller in 1984, and then Michael Eisner in 2005. As the last member of the Disney family to be actively involved in the company, Roy Disney was often compared to his uncle and father. In 2006, Forbes magazine estimated his personal fortune at about USD$1.2 billion

Natasha Jane Richardson (11 May 1963 – 18 March 2009) was an English-American stage and screen actress. A member of the Redgrave family, she was the daughter of actress Vanessa Redgrave and director/producer Tony Richardson and the granddaughter of Michael Redgrave and Rachel Kempson. Early in her career she portrayed Mary Shelley and Patty Hearst in feature films, and she received critical acclaim and a Theatre World Award for her Broadway debut in the 1993 revival of Anna Christie. On 16 March 2009, Richardson sustained a head injury when she fell while taking a skiing lesson at the Mont Tremblant Resort in Quebec, about 130 km from Montreal. The injury was followed by a lucid interval, when Richardson seemed to be fine and was able to talk and act normally. Paramedics and an ambulance which initially responded to the accident were told they were not needed and left. Refusing medical attention, she returned to her hotel room and about three hours later was taken to a local hospital in Sainte-Agathe-des-Monts after complaining of a headache. She was transferred from there by ambulance to Hôpital du Sacré-Cœur, Montreal, in critical condition and was admitted about seven hours after the fall. The following day she was flown to Lenox Hill Hospital in New York City, where she died on 18 March.

John Hoyer Updike (March 18, 1932 – January 27, 2009) was an American novelist, poet, short story writer, art critic, and literary critic. Updike's most famous work is his Rabbit series (the novels Rabbit, Run; Rabbit Redux; Rabbit Is Rich; Rabbit At Rest; and the novella "Rabbit Remembered"). Both Rabbit Is Rich and Rabbit At Rest received the Pulitzer Prize. He published more than twenty novels and more than a dozen short story collections, as well as poetry, art criticism, literary criticism and children's books. Hundreds of his stories, reviews, and poems appeared in The New Yorker, starting in 1954. He also wrote regularly for The New York Review of Books.

Haydée Mercedes Sosa, known as La Negra, (July 9, 1935 – October 4, 2009) was an Argentine singer who was popular throughout Latin America and internationally. With her roots in Argentine folk music, Sosa became one of the preeminent exponents of nueva canción. She gave voice to songs written by both Brazilians and Cubans. She was best known as the "voice of the voiceless ones."

Jade Cerisa Lorraine Goody (5 June 1981 – 22 March 2009) was an English celebrity. She came into the public spotlight while appearing on the third series of the Channel 4 reality TV programme Big Brother in 2002, an appearance which led to her own television programmes and the launch of her own products after her eviction.

In January 2007, she was a housemate in Celebrity Big Brother. During the show she was accused of racist bullying against Indian actress Shilpa Shetty. Following her eviction from the show, she admitted her actions had been wrong and she subsequently made many public apologies.

In August 2008, she appeared on the Indian version of Big Brother, Bigg Boss, but withdrew early from the show and returned to the UK after being told she had cervical cancer. In February 2009, after the cancer metastasised, she was told that it was terminal. She married Jack Tweed on 22 February 2009 and died, one month later, in the early hours of 22 March 2009.

Oleg Ivanovich Yankovsky (February 23, 1944, Jezkazgan, Kazakh SSR, USSR – May 20, 2009, Moscow, Russia) was a Soviet/Russian actor who has excelled in psychologically sophisticated roles of modern intellectuals. In 1991, he became, together with singer Alla Pugacheva, the last person to be named a People's Artist of the USSR.

Ludmila Georgievna Zykina (10 June 1929 – 1 July 2009) was a national folk singer of Russia. She was born in Moscow and joined the Pyatnitsky Choir in 1947. Coincidentally, her surname is derived from the Russian word for "loud". Beginning in 1960 she performed solo. She befriended Ekaterina Furtseva, the powerful Soviet Minister of Culture, and was reputed to be a favourite singer of Leonid Brezhnev. It is known she was a particular favorite of both Kim Il-song and his son Kim Jong-il, performing in Pyongyang six times at the invitation of the Kims. It was also reported that Kim Jong-il was so fond of Zykina that he invited her to Pyongyang in 2008 in hopes that her performance would help him recover from illness.

Among Zykina's many honours were the Lenin Prize (1970) and Order of Lenin (1979) as well as the titles of People's Artist of the USSR (1973) and Hero of Socialist Labour (1987). According to Dmitri Shostakovich, Zykina was "more than a brilliant interpreter, she was a coauthor, co-creator of composers".

Her signature songs include Techot Volga and Orenburgskii platok. The asteroid 4879 Zykina is named after her. Lyudmila Zykina died on 1 July 2009 of cardiac arrest after suffering a heart attack.

Vasily Pavlovich Aksyonov (August 20, 1932 — July 6, 2009) was a Soviet and Russian novelist. He is known in the West as the author of The Burn (Ожог, Ozhog, from 1975) and Generations of Winter (Московская сага, Moskovskaya Saga, from 1992), a family saga depicting three generations of the Gradov family between 1925 and 1953.

Sergey Vladimirovich Mikhalkov (13 March 1913 − 27 August 2009) was a Russian author of children's books and satirical fables who had the opportunity to write the lyrics of his country's national anthem on three different occasions, spanning almost 60 years.

Yegor Timurovich Gaidar (19 March 1956 – 16 December 2009) was a Soviet and Russian economist, politician and author, and was the Acting Prime Minister of Russia from 15 June 1992 to 14 December 1992. He was best known as the architect of the controversial shock therapy reforms administered in Russia after the collapse of the Soviet Union, which brought him both praise and harsh criticism. Many Russians held him responsible for the economic hardships that plagued the country in the 1990s that resulted in mass poverty and hyperinflation among other things, although liberals praised him as a man who did what had to be done to save the country from complete collapse. Jeffrey Sachs, director of Columbia University's Earth Institute, who advised the Russian government in the early 1990s, called Gaidar "the intellectual leader of many of Russia's political and economic reforms" and "one of the few pivotal actors" of the period.

Vladimir Turchinsky (September 28, 1963 – December 16, 2009) was a Russian bodybuilder, television and radio presenter, actor, author, singer and businessman. He also was the president of Professional League of Strongest Extreme.