Russians still consider the dissolution of the Soviet Union as negative and they think this process could have been avoided, studies by sociologists show. As Vladimir Putin put it, it was the greatest geopolitical catastrophe of the 20th Century. Over the last two years, the number of Russians who regret that the former Soviet Union broke up has not been declining. 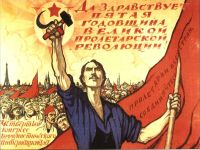 This opinion is now shared by 60 per cent of respondents, Interfax was told at the Yuriy Levada Analytical Centre. This sentiment peaked in December 2000 with 75 percent.

Regret for the break-up of the Soviet Union is mostly shared by pensioners (85 per cent), women of all ages (63 per cent), 40-55 year-olds (67 per cent) and older respondents (83 per cent), those with less than average education (68 per cent), lower income (79 per cent), and rural residents (66 per cent). So it seems that those who actually lived in Soviet times feel that way. This is a significant fact.

"I think everyone has a certain nostalgia for the Soviet Union," said Zhanna Sribnaya, 37, a Moscow writer. "It's trendy because people my age, they can buy what they see, and they want to see their happy childhoods. We remember when ice cream cost 7 kopeks and we remember Pioneer camps [similar to Scouts and Brownies] when everyone could go to the Black Sea for summer vacations. Now, only people with money can take those vacations."

It is no surprise people feel this way in increasing numbers. The dog eat dog world they find themselves in is not exactly secure or comforting.

Another put is this way: "Now we have so many things and so cheap. But do we still need it? No! Nobody even cares about it. What we care about these days? It ’ s tomorrow. We are uncertain about it. Is dreaming about nice toys is worse than fear of tomorrow? That explains our nostalgia. Careless living that is what we had and what we have lost. It’s depression what we have got in return. Depression kills dreams. Depression kills love. Competition gives you depression. Capitalism gives you competition. And then you become zombie. But then life was different. It was full of action. There was not much time left for bad moods. We were interacting a lot with friends, relatives, had many sport and culture centres. But you never felt like an idiot just because you classmate’s ribbon costs more than your all wearing.

Another Soviet citizen living in New York said that under Soviet times it was no loss to part with 3 rubles, you could throw it in the garbage can and not miss it, but in the US you can't lose anything like that because you'd end up dying and starving under a bridge whereas you knew that would never happen in the Soviet Union.

Real freedom means not worrying about being thrown out on the street because you cannot pay for your home. Housing was guaranteed and cheap in Soviet days. Real freedom means not being unemployed because your job was guaranteed and your utilities, transportation and entertainment were very, very cheap. Freedom is knowing that you will have a pension and be able to have a nice vacation every year and that you can get all the education you want to advance your status in life totally free. Freedom also means guaranteed free health care.

Russians feel proud of the might and strength of the USSR. Among other reasons to be proud, 80% in all age groups cite the 1945 victory over fascism. Those over 35 then cite postwar reconstruction, while the youngest group, aged between16-35, cite the great Russian poets, writers and composers. Some 60% of all age groups cite the achievements of the space programme. Still others mention great Soviet success the field of sports. The statement that the USSR was the first state in Russian history to secure social justice for ordinary people was endorsed by most people over 35, 42.3% of those aged between 25-35 and just 31.3% of those aged 16-24.

So it's no surprise that the more and more Russians think life was better. It was. Now they are in a dog eat dog situation, uncertain of anything, without any guarantees. As the man said, what good is it to be able to travel anywhere when you cannot afford to do so?

Westerners lack much of the knowledge they need to understand the loss that Russians feel: the total world of a culture, the security, the depth of a social life that cannot be changed to fit an ideology.