Vladimir Turchinsky, a well-known Russian showman and bodybuilder, was buried in Moscow on December 19. The media continue discussing the death of 47-year old Turchinsky who passed away on December 16. Heart attack is still thought to be the main reason of his death. The Moscow branch of the Investigative department (SKP) has opened an inquest into the circumstances of the death, RIA Novosti reports 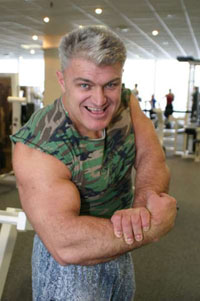 According to one of the theories, the heart attack might have been caused by consumption of steroids for growing muscles. If medics prove the fact of anabolic consumption, it would most likely be stated as the cause of death, Novye Izvestia reports.

Nikolai Abramovsky, a cardiologist, told the newspaper that when anabolic steroids grow muscles, the heart does not catch up and cannot provide all muscles with blood. This can result in a heart attack. According to Yuri Vasilkov, a former doctor of the soccer team Russia, many sportsmen who consume anabolic steroids start experiencing various health problems at the age of 50.

Three weeks ago, Turchinsky visited a naval hospital complaining about chest pain. He was tested, but no abnormalities were revealed. The doctors say that plasmapheresis that Turchinsky underwent the day before his death could not cause the heart attack. Cardiologists are convinced that the procedure is harmless. Plasmapheresis helps to rid the body of toxins. The toxins could be caused by anabolic steroids.

Three years ago, in an interview, Turchinsky confessed that a sportsman who relied on his health alone coul only perform well enough to meet the sport standard. “All the rest is due to one or the other kind of stimulation, “the showman stated.

Professor Gennady Konovalov, head of the center of extracorporeal treatment Medsi where, according to some sources, Turchinsky could undergo plasmapheresis, refused to confirm that Turchinsky was treated in the clinic. However, Konovalov explained that if the procedure was to cause complications, he would have died an hour after the procedure and not the next morning.

As we wrote earlier, Turchinsky died in his countryside house in the village of Pashukovo in the Noginsk district of the Moscow region at 5.00 am December 16. The investigators said Turchinsky was unwell when he woke up. He fainted and collapsed onto the floor. His wife called an ambulance, but by the time paramedics arrived the bodybuilder was dead.

Turchinsky is known as a sportsman and a TV host. He also starred in several movies and had his own business. He participated in the World's Strongest Man competition. One of his Guinness records involves dragging a 20-ton double-decker bus for 100 meters with his left hand.

Turchinsky aka Dynamite became famous after the Gladiators TV show. Since 2003, he was a President of the Professional League of the Strength Extreme.

Turchinsky hosted a number of TV shows and a radio show at Silver Rain radio station.