Russia’s probably most famous bodybuilder, TV and radio host Vladimir Turchinsky died a sudden death in Moscow at age 47 on December 16. He reportedly died soon after a blood rejuvenation procedure which he had had at a Moscow clinic. 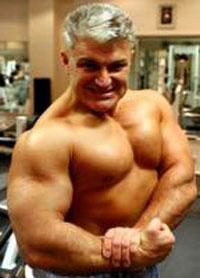 His heart stopped beating at 9:45 a.m. on December 16 at his home in the Moscow region. Turchinsky decided to have the blood cleansing and detoxification procedure at a clinic in downtown Moscow. The procedure has become quite popular in Moscow recently.

“He was at the radio station yesterday. I could not imagine that it would happen to him. He was fine, never complained of his health, everything was fine about him always,” Turchinsky’s colleague at Silver Rain radio station, Vladimir Soloviov said.

“His wife called and said that he died. But his cause of death will have to be determined,” Soloviov said.

Vladimir Turchinsky’s mother said that her son called her yesterday and said that he was feeling great after the procedure.

“He said that he felt as if his blood was all pure. He said that I should do the same,” Nina Turchinsky said.

For the time being, the cause of Vladimir Turchinsky’s death has not been officially confirmed. It is only known that his death coincided with the above-mentioned blood purification procedure.

Plasmapheresis is the removal, treatment, and return of (components of) blood plasma from blood circulation. It is thus an extracorporeal therapy. The method can also be used to collect plasma for further manufacturing into a variety of medications.

The procedure is used to treat a variety of disorders, including those of the immune system, such as Guillain-Barré syndrome, lupus, and thrombotic thrombocytopenic purpura. Dr. D. J. Wallace states that Michael Rubinstein was the first person to use plasmapheresis to treat an immune-related disorder when he "saved the life of an adolescent boy with thrombotic thrombocytopenic purpura (TTP) at the old Cedars of Lebanon Hospital in Los Angeles in 1959". Also according to Wallace, the modern plasmapheresis process itself originated in the "[U.S.] National Cancer Institute between 1963 and 1968, [where] investigators drew upon an old dairy creamer separation technology first used in 1878 and refined by Edward Cohn's centrifuge marketed in 1953.