Katherine (Katya for short), a former Krasnoyarsk model, is about to get married. A few months ago Russian media outlets covered the story about a 19-year-old girl from the city of Krasnoyarsk who had to face very unpleasant consequences after “losing weight” with LiDa slimming capsules. A year ago, her phone rang off the hook while she received multiple offers to take part in advertisement shoots and fashion shows. Today, the ex-model receives no offers. 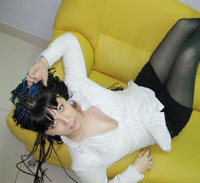 Last year, Katherine decided to lose a few pounds prior to an important fashion show. She began taking LiDa slimming capsules and in a week was some 13 pounds lighter. However, a month later her pounds came back. Now the ex-model weighs 176 pounds instead of 108. She had to leave the modeling business, and the lady who sold her the “miracle pills” is now in prison.

The story was published three months ago, and now it became known that the ex-model is getting married. She even bought a wedding dress.

“It was a very difficult time for me. I was depressed and cried a lot. I lost all my admirers, lost the job I loved. I thought that I would be one of those women who lived alone, without love, without life goals. But then I met Alexander,” confesses Katherine.

Katya and Alexander have known each other since they were kids. All these years Alexander was in love with this long-legged brunette. She did not feel the same way since she was always surrounded by admirers. She was thinking of marrying a tycoon and moving to a prestigious neighborhood. Everything changed when she gained weight. Alexander was the only one left who was still in love with Katya.

“My girlfriends did not like him at first and said he was unreliable and would not make my life a fairy tale. But he did. After that nightmare that has happened to me, I looked at him and life in general differently. We will get married soon,” Katherine said.

Alexander bought her a wedding dress. It was not a Vivien Westwood dress the girl always dreamt of, but the best dress he could afford.

Katya purchased a fitness club membership to lose weight before the wedding. She does not trust pills any more.