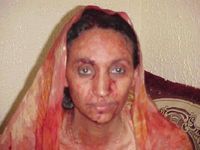 Western Sahara: Aminatu Haidar, Freedom Fighter, Woman, Political Activist. 42 years old, mother. 28 days into her hunger strike, she most fears speaking to her son Mohammed on the telephone because his tears break her heart. Morocco, which invaded this territory in 1975, does not allow her to return to her home.

Back in 1975, the International Court of Justice declared that Western Sahara possessed the right to self-determination after Spain abandoned its colony in north-western Africa, after having made secret agreements to split the territory between Morocco and Mauritania, without having consulted the local population, the Saharawi people. 350.000 Moroccans massed on the frontier and began the Green March, annexing the territory. Mauritania abandoned the part of the territory it had occupied due to resistance by the Polisario Liberation Front and Morocco annexed the rest (1979).

The ceasefire between the Polisario and Morocco was brokered by the UNO in 1991 but Morocco never honoured its promise to hold a referendum on self-determination, instead pouring more and more of its citizens into the territory to create a population imbalance in its favour.

The Saharawi people have never been given their right to vote on self determination by Morocco which illegally annexed and holds the territory.

Aminatu Haidar, 42, is a Saharawi activist. On 13th November, returning from the USA where she had gone to receive an award, she was refused entry into her country, Western Sahara, by the authorities placed by the illegal invading force, Morocco. She began a hunger strike. Today, after a month on water and sugar, her life hangs in the balance.

Is the international community going to mention the plight of the Saharawi people? Is anyone going to force Morocco to live up to its obligations, namely holding a free and fair referendum among the Saharawi citizens before the Moroccans invaded the territory?

Or is this another people left to their own devices?