A seven-year-old boy and his five-year-old sister were found living in a hand-made hut on the bank of the Protva River in the Moscow region. The kids survived thanks to the fisherman, who found them shortly before severe Arctic air reached the center of Russia. The children had been living on the riverside for two weeks. 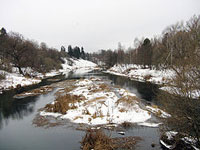 The fisherman, Leonid Telitsyn, a local resident, went fishing to the Protva River last Friday. The man decided to check his hut on the bank of the river, but found that someone had stolen wooden boards from the hut. Later in the day, when he was trying to find the thieves, the man found a wooden hut made of his boards. The hut was built some 500 meters far from the nearest village.

Leonid looked into the hut and was surprised to find two children in there – a boy and a girl. The children – Alexander and Natalia – said that they had been living in the hut for almost two weeks. They were wearing ragged clothes.

“The kids were hungry and pale. I asked them about their parents, and they told me that their parents were living in the hut too, but they were out at the moment. They said that their mom and dad were about to come back,” the fisherman said.

The man left but decided to check back the next morning. He wanted to bring them hot food and see if the parents were with them.

“I found the kids alone again. When I showed them food, they started eating as if they had not eaten for days. I will never forget that. I told them that I would not be able to take them since they had parents, but I promised to come back soon with help. The boy looked at me and said: “Are you going to come back for us indeed?” the man said.

Leonid brought the children to hospital. Alexander and Natalia were diagnosed with hypothermia and exhaustion.

“They were drowsy and did not move much because of hypothermia,” doctors said.

The police have already found the children’s parents. They may face a prison term of up to one year.