The most beautiful married woman on the planet, Victoria Radochinskaya of Russia, does not go in for diets. She likes to sleep instead. 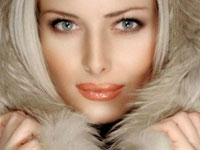 Victoria was crowned as Mrs. World 2009 in Vietnam and recently returned to her home town, Rostov-on-Don. Victoria said at a news conference in the city that she was terribly missing her four-year-old son, Bogdan, whom she could not see for more than a month.

“I think Bogdan will be very proud of my victory. My attitude to all children changed entirely after my son was born. There are no someone else’s children. I was very depressed after we visited an orphanage for sick children in Vietnam. I will try to do something for children afterwards, if my title allows me that,” the beauty queen said.

Victoria Radochinskaya started working in the modeling business when she was 16. She currently works as a manager for advertising. The woman said that she did not have any special preparations for the beauty pageant. There were 78 other women competing for the title of Mrs. World in Vietnam, but it was Russia’s beauty that took the crown.

“It was probably about my spontaneity that made the jury choose me. They told me later that I looked very natural against other contestants. There were many professional models among them. I was honest about all my answers – I was not acting at all on stage. I did not rehearse many of my steps on stage. When I became the winner, my tears were real. I was so happy and could not think of anything at all,” Radochinskaya said.

“I dedicate my victory to all Russia. When there were three finalists left for the finals, they asked us: “Why do you think you deserve the title?” The Vietnamese woman said that she was a mother and a wife and deserved the title for that. The American woman said that she was working hard for the contest. I said that it was Russia – a huge country that chose me – and I could not come back without a victory. I said that the people of Russia wanted me to come back as the winner. I was sorry about what I said when we went backstage. I thought that my remarks were too elevated, but I was just speaking my mind at that moment. I’ve always been supportive of Russia, whether it was about football or Eurovision Song Contest. I am a patriot. I was very proud when they announced my name as the winner because it was Russia that won,” the woman said.

“Like every woman I think about age and I don’t think that years will only make me even more beautiful. I do yoga, I swim and exercise. I also try to get enough sleep. I have a rule: better eat less than sleep less. I usually eat all I want to eat, but don’t eat sausage and pork,” Mrs. World 2009 said.

Many Russian bloggers wrote that Victoria had had plastic surgery.

“My eyes, nose and my lips are all natural. But if a woman feels uncomfortable and wants to change something in her looks – why not doing it?”

16:20
Putin signs agreements incorporating DPR, LPR, Kherson and Zaporozhye regions into Russia
15:39
Putin delivers landmark speech in the Kremlin
15:15
Lukashenko: If Europe wants it, the war may end in a few days
14:54
Ukraine and the West may force Russia to use tactical nuclear weapons
13:33
Russia to take control of entire Donetsk People's Republic within its 2014 borders
19:02
Mobilised citizens to control and defend new Russian territories
15:49
Senator Valentina Matviyenko: Let the whole world wait till October 4
15:06
New Russian territories to require new Russian Constitution
14:36
Russia pays attention to Poland's 'Thank you, USA' remark after Nord Stream accidents
14:22
US Embassy in Moscow urges Americans to leave Russia immediately
Columnists
Why was it important for Biden to start war in Ukraine?