Whitney Houston, who will perform at Moscow’s Olympiisky Arena on December 9, arrived in Moscow on Sunday, accompanied by her 16-year old daughter, Bobbi Kristina Brown. The singer is staying in Ritz Hotel near the Kremlin. 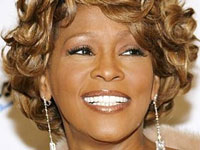 She said she intended to see all attractions in Moscow, including the Bolshoi Theatre.

Unlike her first visit, this time she came prepared with a bunch of winter clothes to protect her from Russian weather. Interestingly enough, she brought the same fur coat she wore in Moscow in 2004. During that visit she caught a bad cold and did not leave her hotel to protect her voice before the concert, which did not help the singer much. This time, she came to Moscow in a good mood, expecting to have a blast.

It seems that her health problems she was dealing with after quitting alcohol and drugs are long gone.

Judging by her rider, she does not drink and is not too concerned with her diet since her menu is filled with sweets and baked goods. She has to have two kettles of boiled water in the room, a liter each of apple, orange, pineapple, and grape juice; liter bottles of Deer Park, Great Bear, Poland Springs and Arrowhead water; assorted herbal teas (berry, chamomile), lemon, honey; Classic Coke, 7-Up, Diet Coke, Root Beer and Canada Dry Ginger Ale; a quart of whole milk, assorted cookies, M&M's; assorted bagels (cinnamon and raisins, salt, plain, whole grains); assorted cheeses and fruits, crackers, peanut butter, Butterfingers and Raisinets; shrimp cocktail, crab legs, chicken or shrimp on sweet and sour sauce, vegetable spring rolls, fried rice with shrimp, turkey breast with cheese, tomato soup, and Welch grape jelly.