Oligarch Mikhail Prokhorov, President of Onexim Group, a Russian investment fund, approached Russia's Navy Commander Vladimir Vysotsky and Saint-Petersburg's Governor Valentina Matviyenko with an offer to finance the iconic Aurora Cruiser. His open letter is published on the website of the Russian Pioneer Journal he owns. 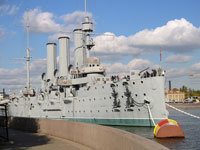 A scandal flared up around Aurora in June, after she was used as a venue for an elite party. Many famous politicians, public figures, and businessmen were invited to participate in the festivities.

The Prosecutor’s office of the Leningrad military district initiated an investigation. The Commander-in-Chief of the Russian Navy issued a decree prohibiting the use of the battleship as a venue for events “not connected with the vital activity of troops.”

"Lately, a possible withdrawal of the Aurora from the Navy has received much attention in the media. I see the danger of the Aurora, which has lately been used too often to host parties and film movies, becoming exclusively an entertainment venue," Prokhorov stated in his letter.

The businessman is convinced that it would hurt the feelings of many patriots and veterans: “…the proud symbol of our history must not become a bone of contention between various agencies in the matter of its upkeep.”

In the event of the withdrawal of the battleship from the Navy, Prokhorov offered his charity fund to finance the Aurora's transfer to the city's budget and guidance of the governor. This would help introducing it to modern museum conservation technologies and increasing its popularity and attendance.

The battleship Aurora is the flagship of the Russian Navy and is an affiliate of the Central Navy Museum. In 1917, a blank shot from her forecastle gun signaled the start of the assault on the Winter Palace during the October Revolution.

A wild party on board the Aurora involving businessmen and officials took place on June 6, 2009, in the end of Saint Petersburg economic forum. It was hosted by Russian billionaire Mikhail Prokhorov, and attended by the city glitterati, business elite, governor Valentina Matviyenko, and the Minister of Economic Development Elvira Nabiullina.

Four months after the scandalous party, the Main Military Prosecutor’s office released the results of the investigation. They came to the conclusion that on the night of June 6, 2009, the officials held the party illegally. Yet, there was no information as to who would be punished.

The investigation concluded, that “on the night of June 6, 2009, the battleship Aurora was used as a venue to celebrate Russian Pioneer journal’s anniversary. The party was attended by 150 invitees. The permission for holding the event, issued by Navy officials, was not in compliance with the requirements of the general military statutes or the legislation concerning objects of cultural heritage. The event set the stage for loss (damage) of the museum exhibits.”