Russian law-enforcement organizations received countless complaints from Muscovites in connection with recent celebrations of Qurban-Bayram, a Muslim holiday – the sacrifice of livestock animals. 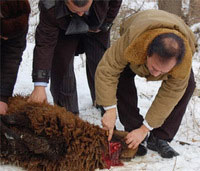 Many Muscovites reported shocking incidents of ritual public animal slaughter and butchering, which could be observed in many locations in Moscow, presumably near mosques.

The Muscovites were concerned about the fact that the police and many TV companies ignored the incidents of the cruel treatment of animals in public.

“We believe that cruelty can not be justified with religious norms or any other dogmas. The perception of acts of cruelty and violence as a norm shows a negative influence on the society on the whole,” an official said.

Moscow’s Center for Protection of Animals received numerous complaints last year too. However, the center could only urge people to respect religious traditions and views of other people who do not accept violence and cruelty, Interfax said.

Qurban-Bayram, or the Day of sacrifice, is one of the most important Muslim holidays. In Islam, the sacrifice of an animal is legal only during 10-12 Dhu l-Hijjah, the 12th lunar month of the Islamic calendar. It is understood as a symbolic repetition of Abraham's sacrifice of a ram in place of his son, a crucial notion in Judaism, Christianity and Islam alike.

Most schools of fiqh accept that the animal must be killed according to the prohibitions of Halal sacrifice and that the animal in question may be a goat, sheep, cow or camel.

The meat from the qurbani is to be equally distributed among the poor, relatives and ones self.