Claudia Schiffer, Eva Herzigova, and Helena Christensen have been considered veteran supermodels for a while now. This year Helena turned 40, Claudia – 39, and Eva celebrated her 36th birthday. For the modeling business, welcoming dozens of 15-16 year old girls on a daily basis, this is a very mature age. Yet, cult supermodels of the 1990s have proved once again that they would give younger models a run for their money. The gorgeous trio came together for a nude photo shoot for a cover of i-D magazine. Claudia, Helena and Eve wore nothing but tall leather boots. 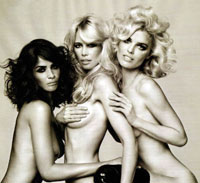 Kayt Jones, a famous fashion photographer, gathered the supermodels for the photo shoot. It seems that there was a perfect understanding between the beauties and the photographer as Claudia Schiffer said: “A great photographer doesn’t stop you or give you boundaries. It’s about flow and chemistry - you just go together like a wave.”

It is unknown what Helena Christensen‘s inspiration for the nude photo shoot was. She might have decided to do it herself or the photographer might have talked her into it. Yet, the beauty from Denmark who will celebrate her 41st birthday in December appears in the photo in her natural splendor. Claudia Schiffer hides her beauty behind a purse, while Eva Herzigova covers herself with her hands.

Despite multiple attempts to leave modeling business and devote themselves to their families, all three models are still among the best-paid models of the world. Generally, participating in a lingerie ad campaign at the age of 40 is a risky undertaking. But not for Helena Christensen. Last year, the model participated in a lingerie campaign for Agent Provocateur. The pirate-inspired campaign featured the model wearing a red corsage and black stockings, swinging a sword and capturing pirates.

Claudia Schiffer, a happy mother of two children, sells like hot cakes. This year she was the face of several luxury brands, including Yves Saint Laurent, Salvatore Ferragamo, Dolce&Gabbana and Chanel.

Why mature models are increasingly more popular for ad campaigns? Experts think it has to do with the financial crisis. Before no one was perplexed when 18-year old girls advertised anti-age lotions. Now, in times of crisis, luxury brands with multi-billion profits have doubts about the appropriateness of using too young girls for their ad campaigns. Young models are no longer capable of whetting consumers’ appetite and making them pay €1,000 for a purse or €8,000 for a dress. It is time to work for those who have money, i.e., mature women. Mostly it is them who can afford an expensive miracle lotion or designer shoes. Mature women will react better to an ad featuring a woman of their age. The most famous brands do not hesitate to shoot supermodels in intimate settings since fitness, plastic surgery, makeup and airbrushing let the top models look wonderful at any age.