Every Human Being Spends Five Years of Life on a Toilet

Generally, an average person spends five years of their life on a toilet. 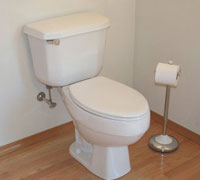 Every Human Being Spends Five Years of Life on a Toilet

The recently created international organization has plenty to do. Like any other industry, toilet industry is not without extremes. On the one hand, WTO compiles international ratings of public toilets marking them with stars, like hotels. For example, Singapore and China already boast 5-star toilets. On the other hand, some 42 percent of the world population does not have an opportunity to relieve themselves in specially designated areas and do it wherever they can. One of the most challenging issues in all countries is elimination of notorious lines in women’s restrooms. World history of toilets proves that all peoples independently of each other came across the same issues and found similar solutions.

* Toilets estimated to be approximately 5,000 years old were found on Orkney Islands near the Northern shore of Scotland. There were drain gutters installed under clay toilets.

* Archeologists excavated utilities diverting waste to street drenches and then outside of the city in the ancient city of Mohenjo - Daro , Pakistan. The utilities were over 4,000 years old .

* Chinese Emperor of the Western Dynasty Khan who lived around 200 B.C was buried along with a stone chair with armrests and a waste tank.

* The Roman sewage system was the most advanced system for waste water diversion at that time. Custodians had to use boats to move along its underground tunnels 5 meters in diameter.

In the middle ages the achievements of ancient civilizations were forgotten. Residents of European cities were not bothered with sanitation and dumped the content of their toilet bowls right in the street. French nobility relieved themselves on palaces’ staircases, balconies, or in the wall niches under perfectly trimmed bushes of luxurious parks that are now admired by tourists from all over the world. When the stench would become unbearable, a king with his people would move to another palace. By the way, these were the times when France first claimed itself as a leader in perfume production. Instead of creating designated toilets, the French were competing in creating perfumes that would cover the stench. In those times bathing was considered unhealthy, therefore strong perfume fragrances were to outshine the smell of a filthy body.

It is not surprising that under such anti-sanitary conditions epidemics of plague, cholera and other scary diseases spread instantaneously. Europeans realized it only by the 19th century and began to think about building sewage systems.

* Back in the day Leonardo Da Vinci suggested improving toilets. He made drafts of water supply, and sewage and ventilation systems. However, the genius was too advanced for his times and his project was left unattended.

* In 1596, Sir John Harrington created a devise called water closet and presented it to the English Queen Elizabeth. The invention did not catch on due to the lack of plumbing. To flush, the water had to be manually poured into a waste tank.

* In 1775, when plumbing already existed in London, Alexander Kamming refined the invention.

* A Russian version of water closet was designed by a military engineer Vasily Blinov. Exactly 130 years ago he presented it in the Emperor’s University laboratory. The device featured a hydraulic valve shaped like a curved pipe separating the content of two bowls. As a result, half a bucket of horse manure dumped in the bowl disappeared as soon as it was covered with a bucket of water.

* Tsar Alexander the II was the first one to use the new water closet. Ten devices were handmade for the Tsar’s palace at the porcelain factory of Kornilivy brothers.

In Russia the first public toilet was built in Saint Petersburg in 1871. The toilet represented a hut heated with a Russian brick oven built above a waste pit. The novelty was successful, and soon the city officials ordered to build 42 more toilets.