“Beauty is in the eyes of the beholder,” the proverb goes. Based on this, I dread to think what kind of a monster zoo some clothes designers live in. 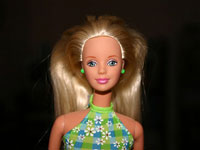 We are not talking about clothes made for podiums and popular people, but the mass-produced clothes designed for ordinary mortals. I rarely meet people who do not have to spend several hours in a store trying on a dozen of outfits to find something that fits.

Many people I know stopped paying attention to color, shape, or fabric, and are happy to grab anything that fits. Tall people always have issues with sleeves that are too short, while jackets designed for average height people have sleeves that reach the knees, obviously, made for gibbons.

The notion of height as well as size is very relative for clothes designers. Despite the numbers on a label, any piece of clothing has to be tried on to figure out the real size.

Designers are quite mysterious. Lately, the perfect female proportions are considered to be 36-24-36. However, it is nearly impossible to find classic pants or jeans that would fit these proportions.

The other day my friend tried to find high-waist leather pants designed for a slim girl, not a beer belly. Shop assistants swore that such pants do not and cannot exist since hips would not fit through a hole designed for a narrow waist. They could not answer the question about the function of a zipper.

Designers obviously think that long legs, regardless of height and gender, are a serious drawback. They are fighting it by making pants short for everyone whose legs are longer than torso. At the same time, they state that a man’s pants must cover his socks and hang a half inch above the floor. I have no idea how it is technically possible unless you are super creative.

Recently designer Christian Louboutin, whose luxury shoes sell for no less than a thousand dollars, was preparing for the Barbie Doll anniversary. He declared that the doll was too fat for his shoes and said that he would change it to look better.

According to the media, all types of shapes have been identified, re-calculated and all most common imperfections were taken into account. It remains unclear why the theory does not match the reality.

Magazines advertise one thing, but stores sell another. Designers post touching words on their websites describing the attention they pay to the needs of their potential clients. Boutiques sell outfits designed for goblins with disproportional arms and legs, bear guts, and fat ankles.

It could be one of two things. Designers either stick to Lamarck’s theory in hopes that out bodies will eventually transform to meet their needs, or their mass addiction to drugs and alcohol has something to do with it.

If the first theory is true, than Russian schools have to introduce mandatory sewing classes. If the second theory holds, then we have to learn to develop a positive outlook in regards to clothes available in stores and stop being picky. It’s not a big deal if sleeves are three times longer than needed. We should be happy that there are only two of them and not 15.