Sasha Pekhtelev, a 13-year-old boy weighing 180 kilos (396.8 lbs), was delivered to a hospital in the city of Volgograd on Friday afternoon. The boy began to suffocate and had swollen legs: he could not get up from his bed for seven days. 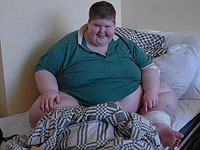 Paramedics had to call a rescue squad to help them take the boy out of the apartment building. Sasha was hospitalized to the intensive care unit of the city’s children’s hospital.

The boy has Prader Willi Syndrome (PWS) - a rare genetic disorder. Doctors also believe that the boy most likely has diabetes.

The boy’s grandmother, Vera Konovalova, said that the boy’s health worsened after “Let Them Talk” talk show on TV, which was devoted to him.

“Sasha is a clever boy. He started crying when he was watching the show because the woman in the TV was lying, as he said. We often go out, his teacher visits him all the time, but they said on the show that the boy was not going anywhere out. They also said there that he does not have any friends and no one takes care of him. This is not true,” the woman said.

Medics have a different opinion.

“Sasha Pehtelev currently stays in the intensive care unit of the hospital because there is no bed in the entire building that would suit a person with his weight. He is in a stable condition. The child with such a diagnosis and such weight is supposed to be observed regularly. However, he received medical aid for the first time only when he was hospitalized with furuncle inflammation last year. In addition, I think his grandmother showed negative influence on him after the talk show because she was represented in the show negatively,” doctor Klavdia Nikitenko said.

The story about the 180-kilo boy surfaced in October of this year, when the boy was hospitalized for the first time. It was reported that the boy had no friends and had been staying indoors for several years. Agencies said that the boy was living only with his grandmother and grandfather.

When doctors arrived, they had to call a rescue team for help. Five strong men were taking the boy down the stairs outside.