A mongrel dog from a town in Russia’s Kuban region has outstripped (unofficially, of course) the crowned champion in the canine world – Pabst, a 4-year-old boxer mix. 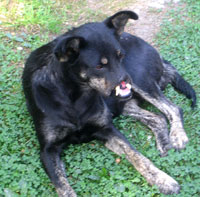 Pabst’s under-bite, scrunched face and floppy ears won him the trophy of the world’s ugliest dog at the 21st Annual World's Ugliest Dog Contest at the Sonoma-Marin Fair, California. The dog became more popular than Leonardo DiCaprio and Brad Pitt.

Pabst’s owner, a 25-year-old Californian man took home $1,600 of prize money, but said that he did not consider his pet that ugly.

What would the jury of the World’s Ugliest Dog Contest say if they saw a mongrel dog from the town of Tuapse in Russia’s south? Pabst would seem a very nice guy in comparison with the Russian dog – Bobik.

Bobik has a terrible grin, a deformed jaw and huge misplaced teeth. Bobik was born like that. The black puppy with an ugly face was horrifying children and local residents. People got used to him afterwards and developed affection to the poor little creature. When Bobik grew up and evinced interest in a female dog that was also living in the neighborhood, one of his rivals – a large red dog – attacked Bobik and bit off a piece of his snout, which made his face even more expressive.

“You’d see a dog like that and you can get a heart attack,” a local resident said.

Bobik, probably like Pabst, is a very kind dog. People say that someone should take Bobik to California for next year’s Ugliest Dog Contest to win the trophy and world recognition.

“I think we could do that. Pabst has become one of the most photographed dogs in the world, but it’s so unfair! All that must go to Bobik, because he is the ugliest dog in the world,” a local man said.