If someone told me years ago, when I was a devoted member of the Pioneer organization, that one day I would start reading articles describing the various ways to love my own body and then discuss them with my girlfriends, I would kick their butts. 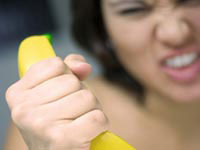 Good girls have no clue what a man and a woman do when left alone or where kids come from, let alone more complicated issues.

If you are still in the dark and pretend to have no idea where to put a condom, do not read any further. Otherwise, you’ll blush and your moral values will be shattered. Although you probably read in the Biblical Book of Genesis a story of Onan who had sex with the wife of his diseased brother but performed coitus interruptus each time, spilling his "seed" on the ground. The story says that this displeased God, who killed him.

Majority of doctors believe that a lion share of all our issues is caused by the fact that we do not know our own bodies well. Marriages collapse because spouses are not satisfied with their sexual lives. Men cheat on their wives because the wives enjoy TV more than sex.

Michael Perry, a London sexologist, thinks that people first of all have to know their own bodies, sensations and desires.

- STDs are not an issue.

- No one knows you better than you know yourself.