Fabrizio, an Italian millionaire, was convinced that a woman from a Russian village can be easily charmed by fancy restaurants and expensive gifts, but he was mistaken. To be with the woman he loved, the millionaire had to move to a remote Russian village. 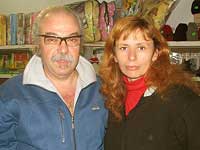 This amazing story began in 2005, when Oksana, a 38-year-old woman, came to Moscow to learn Italian as she planned to work in Italy. She rented a small apartment with roommates, and one night on the way home she met Fabrizio.

“I saw a very nice car passing by me for the fourth time. The window opened, and some guy with a strong Italian accent started hitting on me. He was stunned when I answered in Italian,” Oksana said.

The Italian who introduced himself as Fabrizio saw her to the door and gave her his phone number.

Oksana wasn’t impressed with her new acquaintance and never called him. Then she moved into another apartment and lost his number. Fabrizio tried to find her, but to no avail.

Their second meeting was a sheer accident. Fabrizio saw Oksana in a store and immediately felt that he was in love.

Oksana gave up and let the Italian take her out to dinner. When Fabrizio found out that Oksana is going to work in Italy, he promised her he would quit his job in the Italian Consulate and join her. Fabrizio fulfilled his promise and in addition presented Oksana with a tour around the most beautiful cities in Italy. When the tour was over, Oksana came to Rome, where she was met by Fabrizio. He talked her into finding a job in Pisa so he could see her more often. She got a job in a call center and rented a room in a dorm. For the next six months, the Italian came to see Oksana every night to take her out to a restaurant or go for a walk together.

“Once, Fabrizio took me to a very large store. He asked me if I wanted a stuffed animal. I answered yes; he took a toy from a shelf and walked towards the exit. I asked him if he was going to pay for it and then he told me it was his store,” Oksana said.

Later it turned out that Fabrizio owned two other stores, a funeral home, and a large amusement park. He also owned three cars, a yacht, and a large mansion in the downtown.

Oksana wasn’t impressed by Fabrizio’s wealth, but rather, scared. She told him she didn’t want to be with him since they were too different. Fabrizio proposed, and Oksana said no.

But Fabrizio wasn’t going to give up. He spent next four years trying to win Oksana’s heart. He helped her to get a job of an estate manager, rented her a villa in the country, and introduced her to his mother. But suddenly Oksana was bored with her life in Italy. When Fabrizio realized how determined she was, he started packing his belongings to move back to Russia with her.

The millionaire who was used to luxury had to adjust to village life in Russia. The move won Oksana’s affection, and soon they got married.

A couple of months later Fabrizio realized that he wanted to go back to work, and opened a village store. His lawyers are taking care of his Italian businesses, and he is fully emerged in his Russian life.

“I like it here, it’s very different. People here work all the time. The nature is beautiful, people are kind. But most importantly, here I have Oksana, my love, “Fabrizio said.

This story is amazing, but not unique. Of course it’s not easy for an Italian to live in a Russian village, but those who’ve lived in Moscow for years are not willing to move to the country either, even for the loved ones.

However, it happened to Yelena, a successful Moscow lawyer with a brilliant career and a hefty salary. The woman decided to leave everything to live with Peter, the man she loved, in a tiny village in the Volgograd region.

Now ex-lawyer devotes all her time to her four children and housework. She says she is happy to be with her beloved husband and wonderful kids.