The Russian media knows of two murders, 98 robberies, and six cases of assault with serious bodily injuries that took place in commuter trains traveling in Moscow and the Moscow region since the beginning of this year. Only 95 policemen guard over 1,000 Moscow commuter trains. The passengers that have to use late night commuter trains develop methods of group safety since there is no use to hope for the help from the police. 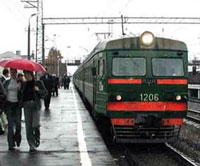 Rule number one: stick together. If a passenger sits or walks along the train by him/herself, it may provoke criminals. Regular late-night commuters know which train car to get into. They choose the train car that stops the closest to the exit on the platform. These unwritten rules have been working for years. The passengers remember each others’ faces, which creates an illusion of a safe group.

For example, to scare away pickpockets, who usually sit down next to sleeping passengers, a co-traveler may walk by a potential victim and wake him or her up by saying: “Wake up, we are getting off soon!” The passenger awakened by the stranger understands right away that this is a sign that pickpockets are around. That means that it’s time to change seats. The passengers believe that this simple scheme works pretty well.

However, this solidarity ends as soon as things get tough. For example, if there is a fight in one of the cars, people try to move to another train car. They sit there quietly and carefully listen: is it still going on or has it ended in murder?

Police cannot protect themselves from attacks

The Russian government does not have an opinion on this issue. Regional officials prefer to keep silent as well. The recent murder of two policemen on a night train from Moscow to Serpukhov, teenage gangs “working” on the same route, and a young woman beaten to death on a train to Noginsk have done nothing to change matters.

The police do not patrol all routes, only the routes with the highest crime rate. For example, if there is a series of robberies on one route, all policemen are sent there and other routes stay unprotected. Sometimes the police are sent on duty without instructions and weapons so they can’t protect even themselves.

Often train operators ask policemen over the intercom to come to a specific train car, but the police never show up. That’s because train operators don’t always know if the train is guarded or not.

“Unfortunately, we don’t have enough people,” explains Tatyana Agapova, the head of the Information and Communications Department of the Moscow Ministry of Internal Affairs. “Policemen do not accompany trains from the departure point to the destination point. They developed the so-called relay patrolling where the police get on a train at one of the stations, ride it for a while and get off.” However, if the next team of policemen never shows up, then the train and passengers are left unguarded.

Every metropolis has safety issues on commuter trains, but these problems are solved in different ways. France was the most successful in dealing with this issue. When Sarkozi came to office, special traffic police was created. Now 160 patrols (2 people each) conduct daily raids, many policemen have specially trained dogs. They are joined by 150 policemen wearing civil clothes. As a result, commuter trains are daily controlled by 470 policemen. Not a single murder was registered in French commuter trains last year.

Trains in Stockholm are equipped with surveillance cameras. In dark hours the trains are patrolled by policemen who work in groups of two. A few years ago the city purchased new train cars, each 107 meters long. The trains consist of two cars only at day time and one car at night, which means there are always people on the train. The most frequent disturbances are loud singing and teenage fights.

In London they also install surveillance cameras on the trains, but only in three cars. The police mainly patrol train stations. Crime rates in London are much higher than in Moscow. Approximately five to ten murders are committed on Moscow commuter trains, and no less that 30 murders are committed on London trains. Last year, 43 train operators in London quit their jobs because they believed their jobs were dangerous. The crime rate grows 15-17 percent a year.

The experiment of The Russian Railways, the nation's monopoly, with the installation of surveillance cameras on commuter trains was deemed inefficient. Commuter trains don’t bring any profit, and surveillance systems are a waste of money. “In Europe commuter trains are not profitable either, but their losses are reimbursed by the government. Here in Russia the losses are covered by cargo trains where commercial companies pay for themselves and those who ride commuter trains,” said Evgeny Alexeev, a specialist of the Institute for Natural Monopolies.

The unwillingness of private carriers to spend extra money on video cameras is explainable. Everything depends of the government’s standpoint. In Europe the governments have made surveillance cameras mandatory, carriers met this requirement and increased tickets prices by 20 percent. Russian Railroad is a state-run company, and it seems that it would be easier for the company and the government to find common ground. However, the existing price of tickets is already too high for many passengers. If the price is further increased, the quantity of ticketless passengers will grow rather than the quality of safety.

Now only Sputnik and Aeroexpress trains are guarded by private security agencies, but these expenses are covered by high prices of tickets.