Eyewitnesses made a curious video of a very strange cloud hovering above Moscow. The video, which was posted on the Mobile Reporter website, shows a cloud which looks like a huge white-rimmed whirlpool. 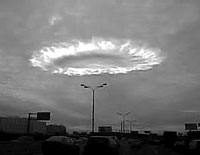 The video was made on October 7, on the Moscow Ring Road.

The phenomenon, which many Muscovites could observe in the western part of the city, is an optical effect, meteorologists said.

“This is purely an optical effect, although it does look impressive. If you look closer, you can see sun rays coming through that cloud. Most likely, the sun was setting when the video was being made. If you observe clouds regularly, you may see many other astonishing things. Clouds of the same class may look absolutely different in different areas. Several fronts have been passing through Moscow recently, there was an intrusion of the Arctic air too, the sun was shining from the west – this is how the effect was produced,” a meteorologist said.

Another meteorologist said that there was a twister forming above Moscow because of several weather fronts in the area. However, the twister did not appear.

“The phenomenon has nothing to do with industrial emissions. They could not produce such an effect against the background of the current weather conditions. If something happens, there is the smog effect, but it appears only when the weather is quiet for a long time. The wind in Moscow has been quite strong recently,” a weather forecaster said.