Man Lives With Bullet in His Lung for 68 Years

Vasily Simonov accidentally breathed in a piece of lead while playing as a child. 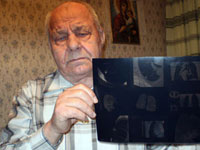 Man Lives With Bullet in His Lung for 68 Years

An 80-year old man, Vasily Simonov, a resident of the city of Togliatti, was very upset after his routine chest photofluorography.

“You have a tumor in your lung,” a doctor said.

The retiree was sent to an ontological center for an MRI. His surprised doctor was looking at the image for a long time.

“Were you wounded in the war?” he asked.

“If only in my sleep,” Vasily attempted a joke. “I was a child during the war.”

“It’s not a tumor in your long, it’s a bullet,” the doctor said.

“Three days later I recalled that as a child, I used to play with a rifle cartridge. It was in 1941. A neighbor kid found a small-bore rifle cartridge somewhere. We disassembled it and took the bullet out. I have no idea why I shoved it into my nose. At first I tried to take it out but failed. Then I breathed it in. I didn’t feel any pain and soon forgot about it,” Simonov said.

The bullet never bothered the man. He was living a regular life. He served in the army, got married, raised four children and retired. Simonov is in a great shape now; he neither drinks nor smokes. Every year the man has routine chest photofluorography. On several occasions doctors told him about a strange dark spot in his lung. However, they believed that there was nothing to worry about and that most likely it was caused by aging. Only the MRI showed what this dark spot was.

“I asked the doctors if they could operate on me. They consulted with each other and decided not to touch it. They said that the bullet was lodged in my lung and covered with lung tissue. Plus at my age an operation could be dangerous. So I guess I’ll live with it,” Vasily said.