World's Most Enigmatic Artist, Banksy, Protests Against His Own Guerrilla Art

Perhaps, he is the most enigmatic artist in the world since no one really knows much about him. The public and art critics don’t even know his real name, just his nickname, Banksy. He is the guy who paints on fences. He is also called “art terrorist” and “guerrilla artist” for his outrageous work. But it’s his scandalous behavior that made him wildly popular. 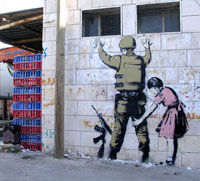 World's Most Enigmatic Artist, Banksy, Protests Against His Own Guerrilla Art

In some of his interviews Banksy says that he studied to become a butcher, but when he saw Bristol residents marking walls with spray cans he decided to become a graffiti artist. However, journalists are not sure whether it’s true or not. They are also unsure that the person they interviewed was Banksy himself.

According to some reporters, he wears a t-shirt stained with white paint, and jeans or shorts. He has a silver tooth. He wears a silver chain and a silver earring. There are also other descriptions.

Once, the artist was supposedly asked about the purpose of his painting. “First I tried to save the world. But now I’m not sure I like this world at all,” Banksy answered.

Banksy always protests against something in his art. He protests against war, capitalism, government, fascism, petty bourgeoisie, etc. More than anything, Banksy enjoys painting people as animals. Once he painted the Queen of England as a chimpanzee on the eve of her birthday. The artist also makes stickers and creates sculptures. One of his most famous works is a telephone booth ruined with an axe as a symbol of the death of the old means of communication.

Sometimes Banksy sneaks into large museums and places his “masterpieces” on the walls. His graffiti adorns the cities of London, Vienna, Paris, Barcelona and San Francisco.

One of Banksy’s favorite endeavors is the “improvement” of old paintings. For example, he made a copy of Monet’s The Water-Lily Pond where the pond is swamped with supermarket carts. His portrait of a green Mona Lisa crying with paint was sold at a Sotheby’s auction for £57,600. His statue of a ballet dancer wearing a gas mask was sold at the same auction for £96,000. On his website, Banksy placed a painting of the bidders pricing the picture with the caption: “I can't believe you morons actually buy this shit.”

Banksy loves pranks. In August 2004, he spread out spoof British £10 notes in Nottingham Hill substituting the picture of the Queen's head with Princess Diana's head and changing the text "Bank of England" to "Banksy of England."

Some of these notes were sold at an auction for £200 apiece. The same year the artist sneaked into the London Natural History Museum to hang a glass box with a stuffed rat inside equipped with sunglasses and a microphone. On the bottom of the box there was a spray can. “Our time will come!”- read the caption for the installation.

Banksy pulled his pranks in a couple of zoos. In the Bristol Zoo elephant enclosure he wrote: “I want out. This place is too cold. Keeper smells. Boring, boring, boring.” At the London Zoo, he climbed into the penguin enclosure and painted "We're bored of fish" in huge letters.

Banksy created an image of a naked man hanging out of a bedroom window on a wall of a Bristol clinic dealing with sexual problems. According to the artist’s idea, the man came to his mistress and was caught off guard by her husband returning home. The Bristol City Council left it up to the public to decide whether the graffiti should stay or go. In the internet poll 97% people supported the “masterpiece.”

Guides to Banksy’s various street works can be found at London newsstands. Two hundred fifty copies of the latest book with Banksy’s photographs and paintings were sold. In Bristol, which is supposedly Banksy’s home town, city officials decided not to demolish an old house with the artist’s graffiti on its wall.

Recently, a pizza box that was supposedly left by Banksy at an exhibition in Los Angeles was listed on E-bay. The seller who picked up the box said that there were a couple of anchovies left in it. The anchovies could have traces of Banksy’s saliva, and therefore, his DNA sample. One of the fans paid $102 for the box.

On May 21, 2007, Banksy was announced as the most outstanding artist in contemporary Britain. However, the infamous artist didn’t show up for the award and preferred to remain a myth.