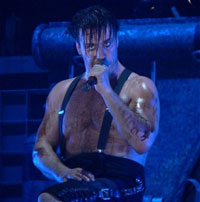 The video was directed by renowned Swedish director Jonas Akerlund. He is known for his work with such superstars as Madonna, Christina Aguilera, Pink, Lady Gaga, Metallica and others. Many of the videos, which he directed, received numerous awards and attracted a lot of public attention. One may recollect one of his most controversial videos – “Smack My Bitch Up” – which he made for Prodigy.

Rammstein’s new video is a shock. However, a closer look at the video shows that it is only a collage. Percussionist “Flake” appears in the video as a transvestite, whereas Till Lindemann’s body appears to be different in various scenes of the video.

You can watch the video online if you follow the link on the official website of Rammstein. (+18 only!!!)