The Ostankino TV tower in Moscow is not just an outstanding creation of 20th century builders. It is the implementation of accurate calculations and perfect architectural ideas of Russian specialists. 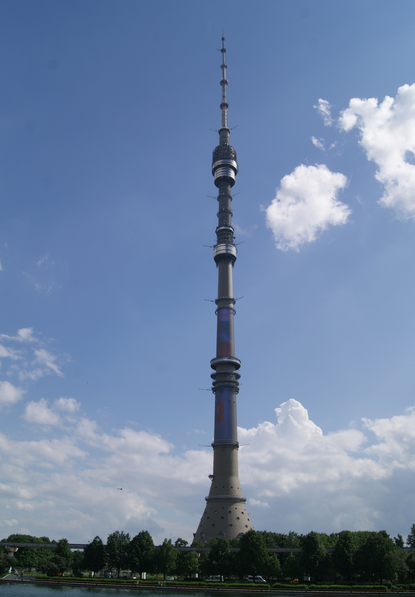 The tallest in Russia (and at the moment of its construction, in the entire world) TV tower was created by the order of the Ministry of Communications of the USSR. Before it was built, TV programs were broadcast form Shabalovka TV studios, through the antennas located on the Shukhovskaya Tower. Intensive development of television and promise of color broadcasting required new and stronger transmission unit.

First a traditional steel TV tower was suggested for the broadcasting needs. The tower would be built like a power line mast with protruding horizontal consoles. However, the builder - Nikolay Nikitin - suggested an unexpected project.

Prior to the TV tower project, Nikitin participated in design and development of Moscow skyscrapers (including the buildings of the Moscow State University), the Luzhniki Stadium and created the iconic Rodina-Mat (Mother Motherland) monument on Mamayev Kurgan in Volgograd.

Nikitin thought the TV tower should be a monolith made of pre-stressed concrete. He designed the tower silhouette overnight. An upside down lily flower with a firm stem and four solid petals-supports was a prototype for the tower. Later the number of supports was increased to ten.

Thirty-three design institutes, 40 specialized construction institutions and dozens of manufacturing plants with their construction offices participated in the tower design and construction.

For the first time Soviet construction workers had to lift a reinforced concrete structure to super heights. Besides this new challenge, Russian engineers had another challenge – to ensure the stability of the structure.

The body of the new tower had to be stable, resilient, and flexible, and its foundation had to be strong and secure.

On September 27, 1960, the first cubic meter of cement was poured for the foundation of the Ostankino TV tower. In the spring of 1961, the construction was suddenly suspended because the engineers doubted the stability of the soil under the foundation.

As a result, the weight of the foundation was 20,000 tons, or 40 percent of the entire mass of the tower. It is worth mentioning that the foundation depth does not exceed 4.6 meters.

In 1966, 150 steel ropes were spanned inside the tower, and on February 12, 1967 the lifting of the 23-ton foundation for the unique 148-meter metal antenna commenced. The antenna now crowns the top of the tower.

On November 4, 1967, the State Commission signed the acceptance report for the 1st construction stage of the Ostankino TV Center. Upon the completion of the construction, the height of the building was 533.3 meters.

Despite its height the tower cannot fall. Its center of gravity is located 110 meters up the tower axle and will never shift beyond the support structure. The admissible deviation at the top is 11 meters in the wind, and the ropes inside the building are strained at 70 tons.

It was the first time ever when all offices of a broadcasting station were located inside the tower and not next to it. The station was created as a multipurpose structure with complex equipment.

The main equipment and maintenance services occupy 16 floors of the bottom part of the cone part of the structure located at the 348.6 and 353.1 meter marks, next to the transmitting antennas.

The main transmitter area is located on the fifth floor and is naturally lit by ten round windows. All equipment is shaped in a unified ring, the compositional center of the interior.

Barrier structures made of aluminum and glass also serve as a strong screen protecting technical staff from harmful effects of strong electromagnetic field.

Besides its main purpose, the tower is also a tourist attraction. Three high-speed elevators lift visitors to the observation deck at the height of 337 meters. Three-storey restaurant “Sedmoye Nebo” (Seventh Heaven) remains popular throughout Russia. The restaurant rotates one to three times an hour to give the viewers a full panorama of Moscow.

To provide fire safety of the tower, only inflammable materials are used for the interior design, furniture and equipment. The materials include granite, marble, anodized aluminum, pressed metal, stainless steel and embossed brass.

Currently, with the height of 540 meters, the tower is the fourth tallest in the world among free-standing structures after the Burj Dubai skyscraper in the UAE, Chinese TV tower Guangzhou, and the CN Tower in Canada.