The history of beauty pageants is rooted in high antiquity. For example, in Troy, beauty pageants were a form of entertainment, and the jury consisted not only of sculptors, actors and poets, but also philosophers, public speakers, and even warriors. Pageants were very popular in Ellas, on Lesbos Island. 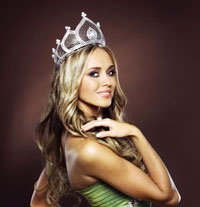 In ancient China, special rules were created for the unique procedure for selecting the beauties. The rules have been preserved to this day in the poetic images of ancient Chinese literature. In the Ottoman Empire, despite strict Islamic morals, noblemen in harems also entertained themselves with selection of the most beautiful wife.

Times have changed. In the summer of 1888, newspapers were riddled with announcements of a beauty pageant to be held that September in Belgium, where the most beautiful girl on the planet was to be selected. The participants only had to send their pictures and a short description of themselves.

Out of 350 applications the judges selected only 21. They were the girls who were judged in person by the jury that consisted of men only.

That first “civilized” beauty pageant was extremely modest. According to a reporter of a Scandinavian newspaper highlighting the unusual event, all men wore tuxedos and all women wore long dresses.

The pageant participants could not appear before the general public. They lived in a secluded house closed to strangers, and were brought to the pageant in a closed carriage.

The winner of the first international beauty pageant was Marthe Soucaret from Guadeloupe. She received the title of the most beautiful girl on the planet and a money prize of five thousand franks.

The Belgian initiative was taken up by other countries. Not only international beauty pageants gained in popularity. The first German beauty contest was held in 1909 in Berlin cabaret “Promenade.” 19 year old Gertrude Dopieralski, a cigar salesperson from Eastern Prussia won the beauty queen title and received a prize – 20 Reichsmarks in gold.

The first winner of the “Miss America” pageant was selected on September 8, 1921. The winner was sixteen-year-old Margaret Gorman of Washington, D.C, the daughter of an official of the Ministry of Agriculture. By the way, that pageant was the world début of a seminude body as the girls showed up wearing swimsuits for the first time.

The “Miss America” pageant was to become the specimen of morality and chastity since the winner was strictly prohibited to show up in places of alcohol consumption during the year following the pageant. Failure to follow this rule was punished by termination of the contract and even revocation of the prizes.

With the appearance of television beauty pageants became widely popular. The fist live broadcasting of the 1954 beauty pageant was watched by 39 percent of the viewers, which is over 27 million people.

Soon after that there were the famous Miss World (1951, London), and Miss Universe (1952, Long Beach). The most beautiful girls in the world stood in front of the jury wearing bikini suits that were a real riot. The winner of that pageant, Armi Kuusela of Finland, received one thousand pounds and a chance to appear on magazines pages.

The first Russian beauty pageant was held in 1988, 100 years after the famous pageant in Brussels. “Miss Moscow-1988” was organized by the Komsomol (The Communist Union of Youth) and the Burda group, whose magazines just appeared in Russia.

Tens of thousands of Muscovites showed up for the casting. The winner was 16 year old Masha Kalinina, who left Russia after her high school graduation.

Soon after that beauty pageants in Russia started growing like weeds, from traditional “Russian Beauty” and “Miss Russia” to not so serious “Miss Legs,” “Miss Breasts,” etc.

There are pageants for various professions – “Miss Press,” “Miss Tourism,” even “Miss Supermarket.” Beauty queens are selected among military people, police officers, and even inmates.

Having won pageants in Russia, our girls were not left unnoticed at the international pageants. The first breakthrough was made by Julia Kurochkina, who won the title of “Miss World” in 1992.

In 1998 Rosalia Muravyeva was announced “Supermodel of the World,” and “Miss Russia” Elena Prigozhina in 1999 won the title “Miss Europe.”