Supermodel Ruslana Korshunova Was Killed Because of Her Hair

New York Police officially dismissed the suicide case of a Russian model Ruslana Korshunova. Having determined the case was a suicide, American police concealed the main evidence. Before her death Ruslana Korshunova was deprived of her main asset – voluminous hair that earned her the nickname “Russian Rapunzel” in the world fashion industry. Blazing evidence was found by a concierge who works in the Manhattan house where the model used to live. His testimony leaves no doubt that Ruslana was murdered. 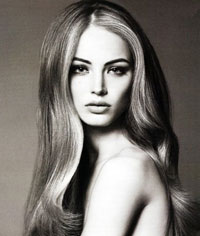 Supermodel Ruslana Korshunova Was Killed Because of Her Hair

Ruslana Korshunova died after falling from the balcony of her New York apartment on June 28 2008. The model fell from the ninth floor of the 12-storeyed building on Water Street. The death of the Russian beauty shocked the world. American police initiated a suicide case, but tried to close it a week later. People close to Ruslana were convinced that the model was murdered and demanded additional investigation. Within the last year the case was closed and re-opened several times. No progress was made in the case. The Russian beauty born in Kazahstan hit fashion jackpot by accident. Ruslana’s friend talked her into placing her pictures in a local airline magazine. That was a life changing moment. Debbi Johns, a representative of the American model agency “Models-1,” saw Ruslana’s pictures by sheer accident. Johns was stunned by Ruslana’s magical face, her cat-like features and voluminous hair. Next morning Ruslana’s life changed forever.

The young model was showered with large seven figure contracts. She was working with Christian Dior, Kenzo, and Moshino. By 2008 Korshunova participated in advertising campaigns of DKNY, Christian Dior and Nina Ricci; she appeared on the covers of French Elle and Russian Vogue.

Last July the Russian Cinderella tale came to a horrible end. The dreams of this young beauty ended on the pavement of a central street in New York.

Police has been investigating a “simple” suicide case for over a year. Providing no explanation, the police concealed the case documents from Ruslana’s mother, Valentina Kutenkova. Only last week the model’s mother was invited to New York to read these documents. According to American detectives, a year-long investigation brought no results.

As a reminder, right after the tragedy the police searched the apartment and found no evidence of struggle. This made them believe that it was a suicide. This official verdict caused arguments both in the US and Russia. There were too many things that didn’t add up.

According to the official version, Ruslana cut the nylon net covering the façade during construction works. After that the model allegedly climbed through the hole and jumped down. Korshunova’s mutilated body was found on the dividing strip on Water Street. To get to that part of the road from the balcony, Ruslana would have to have made a running jump. Judging by the placement of the body, the jump would have to be made from the next building.

The model’s mother demanded additional investigation, but the police were not willing to show initiative.

Muhammad Naqib, an old concierge who worked in Korshunova’s building shed some light on the top model’s death.

“I was shocked when I saw her on the pavement. She was on the road,small and pitiful, in a puddle of blood, surrounded by a crowd. Her arms and neck were broken,” the man said.

“Only next day I realized what was wrong. It was her hair! It was much shorter than when I last saw her that night, lively and happy. It seemed like it was cut in a hurry since the ends were uneven.”

“All I got is a polite “thank you.” But nobody called me for an interview,” said Moscow autopsist Sergey who worked on her makeup in a Moscow morgue. “The hair could fall out because of a strong impact, but it could not become shorter. When I was preparing the body for a funeral, I noticed that the hair was in a very poor condition. I even offered to find her a wig, but her relatives refused. The ends were uneven, as if someone and cut it with seizures.

“Cutting victim’s hair before death is a sign of a psychological disorder. The actions are similar to those of a maniac. An attempt to own the woman’s hair is a sign that the criminal not only desired to physically destroy her, but wanted to humiliate her as well. These criminals often take similar “souvenirs” with them as a trophy. During the search of Korshunova’s apartment the police found a sharp knife that they think she used to cut the net on the balcony. It is very likely that this very knife was used by the murderer. He deprived her not only of her hair, but her life as well.

P.S. According to the testimony of many witnesses, no strangers or suspicious people were noticed on the day of Ruslana’s death in her building on Water Street. The back exit in the yard is visible to the concierge, and nobody could pass by the reception unnoticed. But a lot of apartments are rented out in Manhattan skyscrapers, and Ruslana’s building is not an exception. It could very well be that Ruslana greeted her future murderer every morning in the elevator, or met him in a supermarket. During her last visit, Korshunova’s mother stopped by the apartment. Horrible memories made the woman cry. According to Ruslana’s friends, Valentina spent several hours at the door of the cursed apartment. She is still hoping to find the answer from American police.

After Ruslana’s death bloggers discussed the shocking excerpt from her online diary: “I am a bitch! I am a witch!” The media discussed the fact that Korshunova kept occult literature in her apartment and practiced black magic. The bloggers were particularly upset when they found out that the 20-year old beauty was buried in a dark dress and not traditional white. They see it as a direct evidence of Ruslana’s connections with “dark forces.”

The police contended these rumors after the search. No books on black magic were found in her apartment. The room was filled with girly knickknacks and stuffed animals. Kira, the top-model’s American friend, shed the light on the dark dress mystery.

A New York autopsist who performed Ruslana’s autopsy asked us to find a dark dress to hide the signs of the autopsy and fall. We tried to find something appropriate but in vain. So the police gave us permission to go to the sealed apartment and take one of her dresses. Her mother chose Ruslana’s favorite dress.