Ukraine’s Minister for Family, Youth and Sports Affairs, Yury Pavlenko, stated that Elton John would not be able to adopt a Ukrainian boy due to the singer’s age and family status, RIA Novosti news agency said. 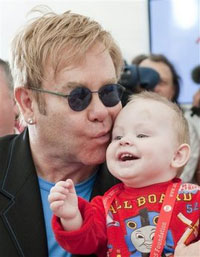 According to the minister, adoptive parents must be married, but Ukraine does not recognize same-sex marriages. In addition, the singer, aged 62, is too old to become a father to the 14-month-old baby, the minister said. Ukrainian laws stipulate the age difference between parents and child shall not be more than 45 years.

British singer and musician Sir Elton John, who is officially married to his partner David Furnish, visited an orphanage for HIV-positive children in Ukraine’s Donetsk region last weekend. The singer said that he would like to adopt the 14-month-old boy, named as Lev, whom he had spotted in the orphanage.

Elton John is the founder of one of the world’s largest HIV/AIDS foundations. The singer visited the orphanage in the town of Makeyevka on Saturday within the scope of cooperation between the singer’s and the Ukrainian’s anti-AIDS foundations. The effort was taken to improve the lives of the children born from HIV-positive mothers.

The world-famous musician said at a news conference after visiting the orphanage that he and his partner, David, had always been dreaming about adopting a child. However, Mr. John’s lifestyle, his tours and his age made him think that going on such an endeavour would be unfair to the child, whom he would wish to adopt.

The singer said that he changed his mind immediately, after he had seen the little boy, Lev (the name literally translates into English as Lion), at the orphanage.

John does not have any children, but does have ten godchildren as of March 2006. Besides the aforementioned Sean Ono Lennon, John's godchildren include Elizabeth Hurley's son Damian Charles, David and Victoria Beckham's sons Brooklyn and Romeo, and the daughter of Seymour Stein.

Throughout his career, John has battled addictions to alcohol and cocaine. By 1975, the pressures of stardom began to take a serious toll on the musician. During "Elton Week" in Los Angeles that year, John suffered a drug overdose. He also battled the eating disorder bulimia. In a CNN interview with Larry King in 2002, King asked if John was aware of Diana, Princess of Wales's eating disorder. John replied, "Yes, I did. We were both bulimic."

He is also rumoured to have struggled with significant financial difficulties caused by his profligate spending. In the early 1990s, John formed a friendship with pop singer Michael Jackson, who later dedicated his 1997 album Blood on the Dance Floor to him for the support John had given him during his struggle with addiction to prescription morphine.

After many years of struggling with drug and alcohol addiction, John finally checked himself into a drug rehabilitation clinic in 1990. He has cited the highly publicised case of Ryan White, who died that same year of complications from AIDS (and at whose funeral John performed), as a major motivating factor in his decision to enter rehab. In July 1999, he was fitted with a pacemaker due to an irregular heart beat."