Be Nice To Waiters or Eat Food from Floor

A waiter will never spit in a dish. They will not do it at least during the time when they hope to receive a tip. There are many jokes and legends about the waitstaff, and some of them are really shocking. 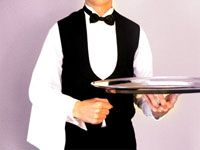 Be Nice To Waiters or Eat Food from Floor

Many waiters and waitresses in Moscow restaurants and cafes said that they did not overcharge their clients. They say that it is hard to do even if they would like to pursue such a goal because everything is computerized now.

All waiters and waitresses dream to open their own restaurant, and all of them are certain that they will do it best.

Many waiters have higher education. They become employed at the public catering to earn some extra money. It is generally believed that people start working in a restaurant with a hope to make good money on clients’ tips. This is not true. However, many of them forget that a tip is a bonus that they have to earn. They simply take it for granted and may become rude to clients if their expectations are left unanswered.

Many people believe that clients may often put the make on waitresses, but this does not happen all the time.

Waitstaff mostly prefers to deal with male clients. This one is true, although some male clients can be worse than pregnant women.

The Moskovskaya Pravda newspaper published several interesting stories of how waiters may punish their ‘bad’ clients.

Waiters hate clients who pay by credit cards because they never give them a tip.

“We had a client recently. He looked like a very respectable man. A pricy watch, a good designer suit and a fine shirt – everything was exquisite. I thought that he would be a very good client, but I thought that wrong. He simply tormented me with his questions – what is this dish made of, which ingredients, can you change the garnish for this dish, which oil did you use to make this, where did you get these tomatoes from, which province. I was answering all those questions in a very polite way because I thought that I was not doing that in vain. But the guy paid by credit card and did not leave anything. He returned the next day – the same story started. He showered me with questions and even advised I should smile more. I decided that it was enough. So, he ordered a strawberry jelly for dessert. We ran out of strawberry that day, I mean – it went off, and the cook threw it out. I took some berries from the garbage can, minced them and added them to his dessert. I believe that the rest of his day was entirely ruined and he spent all of it in the bathroom,” a waiter said.

“When you’re 16 or 17, it is great pleasure to make fun of customers and see them eating a burger in which you had spit – this is cool, it’s like your challenge to the society. Young people may often do it in smaller cafes, but a 30-year-old waiter will never do such a thing,” an experienced waitress, who wished to remain anonymous, said.

In conclusion, we would like to say that the people, who visit coffee shops and restaurants on a regular basis, should better respect their waiters and be nice to them. Otherwise, they just risk to eat something from the floor, like a dog.