Officials at Moscow’s Committee for Monumental Arts put forward a suggestion to remove the monument to Karl Marx from the city center. Architect Ivan Kazansky said that the founder of communism should not be standing in the very center of Moscow just because of the fact that Marx never visited Russia’s capital. Furthermore, it is Britain and Germany that are supposed to erect his monuments, the official added. The adversaries of the idea claim that the decision to remove the monument would be inadequate, especially under the conditions of the crisis. 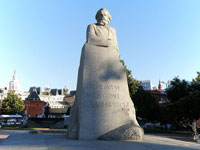 Ivan Kazansky said that the monument to Karl Marx should be relocated, because “the monument is destruction per se.”

The issue of Karl Marx’s monument in Moscow has attracted public attention on a number of times before. Sergey Perfilyev, a Muscovite, once addressed to the Committee for Monumental Arts with a suggestion to replace the statue of Marx, a non-Russian historical figure, with a bronze statue of Vladimir Putin. Needless to say that the committee declined the proposal.