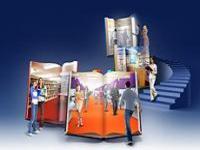 Moscow is preparing for the 22nd Annual Book Fair. The Book Fair is scheduled to run from September 2nd until September 7th. There will be as many as 180,000 books from 55 countries displayed within the new 24,000 square meter pavilion, the pavilion of the All-Russia Exhibition Centre (VVTS). After 32 years of successful work in the Pavilions #57 and #20, the major Russian book forum is moving into the newly built Pavilion #75, differing from its predecessors with its comfort and size.

This year, the Federal Agency of Print and Electronic Media has registered the publication of 82,000 book titles. This is an increase from the previous year. Approximately 470 million books have been printed despite the economic crisis and there is always a market for all these books.

The organizers are offering two-day tickets which cost what amounts to 1.5 Euros, the same price as last year. The highlights of the Russian exposition are books by the famous Vladimir Voinovich, sci-fi author Vladimir Gubarev, Andrei Bitov, Alexander Kabakov, poet Andrei Dementyev and many others. Participants will be able to meet some Russian authors.

Indian literature will especially featured because 2009 is the Year of India in Russia. More than 100 Indian publishers will be showcasing their material. There will be a series meetings of Russian authors and translators with Indian colleagues, as well as seminars devoted to subjects: women –authors, Indian authors translations in India, and Russians – in India, Philosophy and religion, scientific-technical literature, medical editions, book illustrators work exhibition, concert programme, and a special division named “Indian Cinema” – this is preliminary and not a completed list of themes featured by the organizers of the Indian stand. The initiator of the cultural programme will be the Djavaharlal Neru Centre in Moscow.

Electronic books are also on the increase from previous years. A great opportunity for one and all. “Books Serve Peace and Progress” is the theme.