Alfred Hitchcock's Works Cost Much More Than All Oscars Altogether

All admirers of the detective genre mark the 110th anniversary of Alfred Hitchcock, an outstanding filmmaker and writer, on August 13. Those who appreciate Hitchcock’s works compare him to the greatest classic artists of the genre, like Agatha Christie. 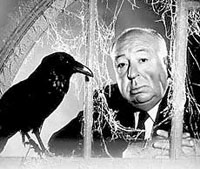 Alfred Hitchcock's Works Cost Much More Than All Oscars Altogether

Hitchcock has been long called the greatest director of the 20th century, although he had never gone beyond criminal-detective plots and had written no scripts. However, he found his own way of telling about himself, mankind and the world around.

Hitchcock could create the atmosphere of horror and menace, emanating from practically any harmless thing.

He also knew that nothing but a good joke could increase the tension. He was a true-born director, capable to turn not only an average detective story but even a telephone book into a masterpiece. When speaking about his movie Dial M for Murder where the action took place in a living room, Hitchcock noted that he could even shoot that film in a telephone booth with the same success.

The most frightening movie, Psycho, is considered by some to be the mother of present-day horror movies. Many people, who saw Psycho for the first time, were afraid to take a bath for months. Meanwhile, the famous filmmaker himself had never suffered from any mental disorders, led a steady life and had never been unfaithful to his wife.

Despite all his glory, Hitchcock proved to be underappreciated in his life. The outstanding director had never won an Oscar for his work. However, the fact that Hitchcock’s anniversary attracts so much attention speaks a lot more than any gilded statuette.