An extremely rare incident occurred in the Prenatal Center of the city of Sochi (Russia’s south). A baby girl with the so-called transposition (known as situs inversus in medicine) was born there. The baby girl has all her internal organs reversed or mirrored from their normal position, Itar-Tass news agency reports. 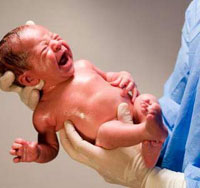 The incorrect position of one of visceral organs occurs in one of 10,000 births. The girl was born on time, but she was very weak. The doctors later discovered that the baby had a mirrored position of all her internal organs. Her heart is located in the right side of the thorax, her liver is in left side, and her stomach is on the right.

Khamzat Isayev, the head physician of Sochi’s Children’s Hospital, where the girl was delivered the next day after birth, said that it was a first incident like that in his medical practice.

“The child is in a stable condition right now. She is on an artificial respirator since the baby swallowed amniotic fluid. The child was also diagnosed with incomplete pneumonia,” the doctor said.

There were no other serious abnormalities found. There is no need in the transplantation of the organs yet, the doctors said.

Situs inversus (also called situs transversus or oppositus) is a congenital condition in which the major visceral organs are reversed or mirrored from their normal positions.

The condition affects all major structures within the thorax and abdomen. Generally, the organs are simply transposed through the sagittal plane. The heart is located on the right side of the thorax, the stomach and spleen on the right side of the abdomen and the liver and gall bladder on the left side. The left lung is trilobed and the right lung bilobed, and blood vessels, nerves, lymphatics and the intestines are also transposed.

Many people with situs inversus totalis are unaware of their unusual anatomy until they seek medical attention for an unrelated condition. The reversal of the organs may then lead to some confusion, as many signs and symptoms will be on the 'wrong' side. For example, if an individual with situs inversus develops appendicitis, they will present to the physician with lower left abdominal pain, since that is where their appendix lies. Thus, in the event of a medical problem, the knowledge that the individual has situs inversus can expedite diagnosis. People with this rare condition may inform their physicians before an examination, so the physician can redirect their search for heart sounds and other signs. Wearing a medical identification tag can help to inform health care providers in the event the person is unable to communicate.

Situs inversus also complicates organ transplantation operations as donor organs will almost certainly come from situs solitus (normal) donors. As hearts and livers are chiral, geometric problems arise placing an organ into a cavity shaped in the mirror image. For example, a person with situs inversus who requires a heart transplant needs all the vessels to the transplant donor heart reattached to their existing ones. However, the orientation of these vessels in a person with situs inversus is reversed, necessitating steps so that the blood vessels join properly.