Americans Adopting Russian Boy Find Out They Separate Him from Sister

An American family, having adopted a boy from a Russian orphanage, came to find out about the existence of his sister. It became incredibly difficult to reunite the brother and sister, who was left in Russia alone. However, the two-year-old girl left to the USA to meet her brother, Ivan. The boy was adopted one year ago. The foster parents from the United States were not afraid to take up the struggle against the Russian bureaucracy. They spent $11,000 on plane tickets to travel to Russia and back, but eventually won the struggle. 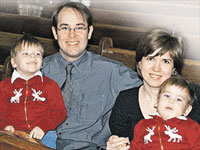 Americans Adopting Russian Boy Find Out They Separate Him from Sister

Olga, a 33-year-old woman, a native of Russia (her parents emigrated to the USA) and Brad Pinkstons have been married for 12 years. Olga is a student of a medical school. Brad is a manager at an insurance company. They have their own son, 3-year-old Daniel. A year ago the Pinkstons decided to adopt a child from Russia. They visited the Russian city of Perm, where Olga’s relatives lived. The family got acquainted with a little boy at a local orphanage. The boy’s mother abandoned the boy at maternity hospital. When the Pinkstons got acquainted with the boy he could not even walk. He had infantile cerebral paralysis, asthma and eczema. The American family knew that the boy had four sisters.

However, the officials lied in teeth that all the children had been adopted. And only when the Americans were departing with Ivan as their son, a representative of the orphanage gave accidentally away that Ivan’s younger sister, Alyona, a beautiful and healthy girl, had been left in the orphanage. The girl was living in the orphanage too, but officials concealed this fact, as if it was a military secret.

The American couple expressed their willingness to adopt the boy’s sister, but received no permission from that from bureaucrats.

It turned out later that a well-off couple from the Russian city of Izhevsk had visited the orphanage and intended to adopt Alyona. The couple was visiting the girl every week.

The Ministry for the Social Development of the Perm Region gives priority to Russian adoptive parents, officials declared.

However, it proved that there were two mutually exclusive articles in the Family Code of Laws of the Russian Federation. One article states that foreigners may adopt a child if Russian families refuse to take this child. The second article asserts that siblings can not be separated during adoption.

According to representatives of the Organization for Protection of Children’s Rights, this question could be settled much easier if officials had not made such serious mistakes. They did not act in the interests of the children.

The court took the children’s side. The prosecutor's office even presumed that the officials of the orphanage were going to ask for a bribe from the Russian family for their assistance in the adoption of the girl.