A national of Belarus died as he fell off the monument to Vladimir Lenin, the leader of the Great October Revolution, in the town of Uvarovichi, the Gomel region of Belarus. The man climbed up the monument in a state of alcoholic intoxication, the local police said. 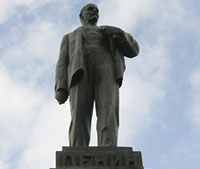 The 21-year-old man was having fun in a company of his friends near a local school. The man decided to climb up the five-meter-high (16 feet) statue of the revolutionary leader, the founder of the Soviet Union. The statue was erected in the town in 1939, Itar-Tass reports.

The young man hung from the statue’s arm and started swinging. The plaster-made statue cracked and fell into pieces because of the man’s weight. The man fell on the ground and pieces of the statue landed on him.

The young man died on the way to hospital.

A similar incident took place in Russia in 2003, in the settlement of Shushenskoye, the Krasnoyarsk region of Russia, where Lenin was living in exile from 1897 to 1900. A local student climbed on the four-meter-high plaster statue of Lenin and hung from its arm. The monument cracked, and pieces of it killed the man as he fell on the ground.

Most likely, the two men were unaware of the fact that the monuments were made of plaster. The statues looked as if they were made of metal, but it was only the paint that covered the plaster.