Communists of St. Petersburg, known for their controversial statements, addressed to pop singer Madonna, who is coming to St. Petersburg on August 2 to perform on the city’s iconic Palace Square. The communists reminded the pop star that she would be playing at a very important location and urged Madonna to sing something adequate during her show in Russia, Interfax reports. 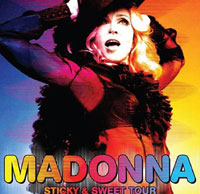 The address, which was posted on the official website of the organization, said that the Palace Square was not only the historical center of the world’s most beautiful city, but also the place, “where the Great October Socialist Revolution, the siege of the Winter Palace and the arrest of the cursed interim government took place.”

Therefore, the communists offered Madonna to include a well-known revolutionary song in her set list – International Anthem, or La Marsellaise, at least.

The communists gave credit to the singer’s talent and her efforts that she takes to save the children of Africa. However, they also urge the star to realize the responsibility that she will have singing her hits at such an iconic location.

“You must not wiggle your butt here, wear provocative costumes and do the poll dancing. You have to look unpretentious, sing melodically and mind moral norms. Be as successive as you were before. You compared McCain to Hitler, you criticized the war in Iraq and praised Martin Luther King. There is only one step that you should make to sing songs of the revolution. And we will come to your concert, if we have enough party dues for that.

“We also want to express our criticism to you. You had a superficial approach to getting to know Russia. You should have learnt a different word to greet Russian fans – Lenin or USSR. Besides, the fact that you bring your own food cannot but hurt our feelings. The Russian cuisine is a hundred times better than that of Britain, where they have only sticky oatmeal and greasy puddings. Try the Russian blinys [pancakes], borsch and newly drawn milk and you will realize how much you miss in life,” the communists wrote in their address to Madonna.

The communists also offered the singer to wear a Russian sailor’s hat, a sailor’s jacket, a striped vest and, of course, the red flag of labor.