The Black King and The White Queen

Michael Jackson and Madonna are obviously two biggest pop stars of the 20th century. The dethroned King of Pop died on June 25, before he could have a chance to go on stage to celebrate his triumphant return. The Queen of Pop is still there, and she is not going anywhere. Madonna continues her Sticky and Sweet tour and prepares to make a stop in Russia’s St. Petersburg on August 2. Michael is still hidden somewhere, and nobody knows what exactly happened to his body, whether he was buried or not. Quite on the contrary, Madonna is still alive and kicking – everything that she touches continued to turn into gold. 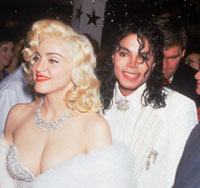 The Black King and The White Queen

Madonna has never had an iota of Michael Jackson’s talent. However, she could compete with anyone in terms of her ability to work and accomplish something. When Madonna was looking for a way to hit the big time, Michael Jackson was conducting several revolutions in music. He made MTV prosper as he started making short films to his songs. Jackson came up with a whole new genre – a mixture of soul, funk and disco. The proportions of his mix were so subtle and unique that nobody else has been able to repeat his recipe since then.

The Soviet press started writing about the phenomena of the two mega stars nearly simultaneously. Both Madonna and Jackson were portrayed in the USSR as the products of bourgeois culture, as something evil and unacceptable in the society of communism. Soviet journalists used to slam Madonna for being sexually provocative in public. Strangely enough, nearly all journalists of the atheist Soviet Union were astonished with the stage name, which, as they thought, the singer chose for herself just like that. They did not even think that Madonna was her real name. It is worthy of note that many people in Russia still think of Madonna as a woman, who became famous just because she chose such a prominent stage name.

Madonna is still the same when it comes to her public performances. She is still provocative and sexy, whereas Michael Jackson fell victim to his own lifestyle. Michael Jackson was making breathtaking videos and amazing live shows during the 1990s. He was unreachable as a dancer and singer; there was no one else like him in the world. Madonna was making hit songs and videos too, but she was exploiting sexuality and became of the world’s best-known revolutionaries at this point.

Michael did not know what he was doing. It seemed that he did not want to grow up and become an adult man. He amassed multi-million debts and did not have an idea of how to settle them.

Madonna is a genius when it comes to making money. She always knows what she wants, what sells and what does not sell in the world today, and she always catches the right trend to be able to stay afloat and make people stare at her and listen to her music.

The King of Pop became the Ex-King of Pop very quickly. He was not making new music and was about to file for bankruptcy instead.

Madonna is far away from all that. She is sexually provocative only on stage, but became a grown up lady in everything else. She started writing children’s books, married an English film director, whom she successfully divorced later, and had four children – two of her own and two from Africa. She releases new albums regularly, and her world tours set box office records. Madonna will never lose her fortune which she amassed in almost 30 years.

Michael Jackson was making grand live shows, but then suffered from grand complexes, which eventually killed him. His “return” as the King of Pop will always be remembered as a grand affair in the world of show business.