An unpleasant incident took place last week at the international airport of Cardiff, the capital of Wales. On Thursday night, the customs officers of the airport detained and searched Ksenia Sukhinova, the winner of Miss Russia and Miss World beauty pageants held in 2007 and 2008. 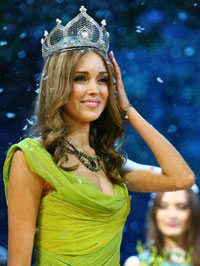 Sukhinova, 21, said in an interview with WalesOnline that the officers were examining her luggage for an hour, as if they considered her a terrorist. Ksenia said that it was a first time she had such an experience and that she could not find an explanation for the incident.

Ksenia Sukhinova arrived in Wales as a guest of honor to participate at Miss Wales beauty contest, which took place there during the weekend. The woman said that there were no dangerous things in her bags.

The Welsh Ministry for the Interior withheld comments and only said that the officers were doing their job, selectively choosing arriving passengers for inspection.

It seems that the officers thought it would be funny to inspect the luggage of the Russian beauty queen.

Ksenia Sukhinova was born 1987 in Nizhnevartovsk. She lives in Tyumen, Siberia, where she is a fifth-year student at the Tyumen State Oil and Gas University, studying cybernetic systems. She has an excellent academic record; according to the university's deputy president Veronika Yefremova the discipline is very difficult, "but Sukhinova's grades are all A's and B's."

Ksenia's measurements are 1.78m (5”10’), she has blonde hair and blue eyes. Her first name is often romanized Ksenya or Kseniya. She is a big fan of sports, and has been doing calisthenics, swimming and biathlon since childhood. Her favorite book is Master and Margarita by Mikhail Bulgakov. When asked a question about her private life, she confessed that her heart was "still free."