The final of Russia’s Miss Moscow 2009 beauty pageant took place on June, 15 in the atmosphere of a fairytale. 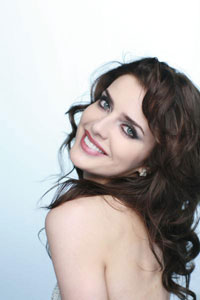 Thirty tall beauties took all the efforts to demonstrate their charm, talents and ability to walk gracefully in high-heeled shoes.

According to the organizers of the contest, the girls were supposed to stay attractive while traveling aboard the ship of life. The beauties changed a whole kaleidoscope of dresses by famous Russian designers to show their looks and outfits for morning, day, evening and night.

No celebrities were present in the jury at the contest. The only celebrity judging the contest was world figure skating champion Irina Slutskaya. The award ceremony was delayed as the jury found it difficult to decide whom to award the “Miss Moscow” title.

The masters of the ceremony did all their best to fill the extended pause. Well-known singers and musicians also helped to entertain the audience. The name of Miss Moscow 2009 was finally announced after three hours and a half since the beginning of the contest.

The Miss Moscow crown was awarded to 25-year-old Yulia Obraztsova. Yulia turned out to be the most beautiful, the eldest and the tallest contestant.

Yulia is a singer and an actress. She makes music videos and appears in Russian films. Now she plays the leading part in the movie shot by Russian director Egor Konchyalovsky. She also publishes a magazine about the animal world - Animal Stamp.

Yulia told journalists that despite she was quite self-assured, by the end of the beauty contest she did not believe she could win, as all the contestants were worth winning the pageant. Yulia surprised journalists by her plans for the nearest future. She promised that the first thing she would do as Miss Moscow would be a campaign to protect animals.

However, Yulia will primarily represent her city at the national Miss Russia 2009 contest this year.