A man from the Russian city of Kaliningrad caught a gigantic swordfish on July 12, which was marked as Fishing Day in Russia. The fish weighed more than 75 kilos – such large tropical fish is extremely rare in Russia’s northern seas. The man caught the swordfish on the coast of the Baltic Sea, near the town of Baltiisk. 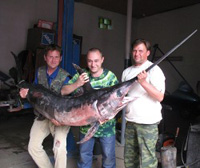 Specialists find it difficult to explain why the fish migrated from warm to cold waters and why it left its usual habitat. The fish was caught near the beach, where it found itself as a result of a heavy storm.

Aleksey Lyatun, an experienced Russian fisherman, had to take a lot of effort to catch the three-meter-long fish. The man and the fish were of the same weight - they were struggling on equal terms, in the same weight category.

The delicious meat of the swordfish was served at a party to celebrate the Fishing Day. The man delivered the fish’s head to the scientists of a local university.

Swordfish, also known as Broadbill in some countries, are large, highly migratory, predatory fish characterized by a long, flat bill. They are a popular sport fish, though elusive. Swordfish are elongated, round-bodied, and lose all teeth and scales by adulthood. They reach a maximum size of 177 in. (455 cm) and 1,400 lb (650 kg).

The swordfish is named after its sharp beak resembling a sword (Latin gladius), which together with its streamlined physique allows it to cut through the water with great ease and agility. Contrary to belief the "sword" is not used to spear, but instead may be used to slash at its prey in order to injure the prey animal, to make for an easier catch. Mainly the swordfish relies on its great speed, capable of reaching speeds up to 50 mph (80 km/hr), and agility in the water to catch its prey. One possible defensive use for the sword-like bill is for protection from its few natural predators. The shortfin mako shark is one of the rare sea creatures big enough and fast enough to chase down and kill an adult swordfish, but they don't always win. Sometimes in the struggle with a shark a swordfish can kill it by ramming it in the gills or belly.